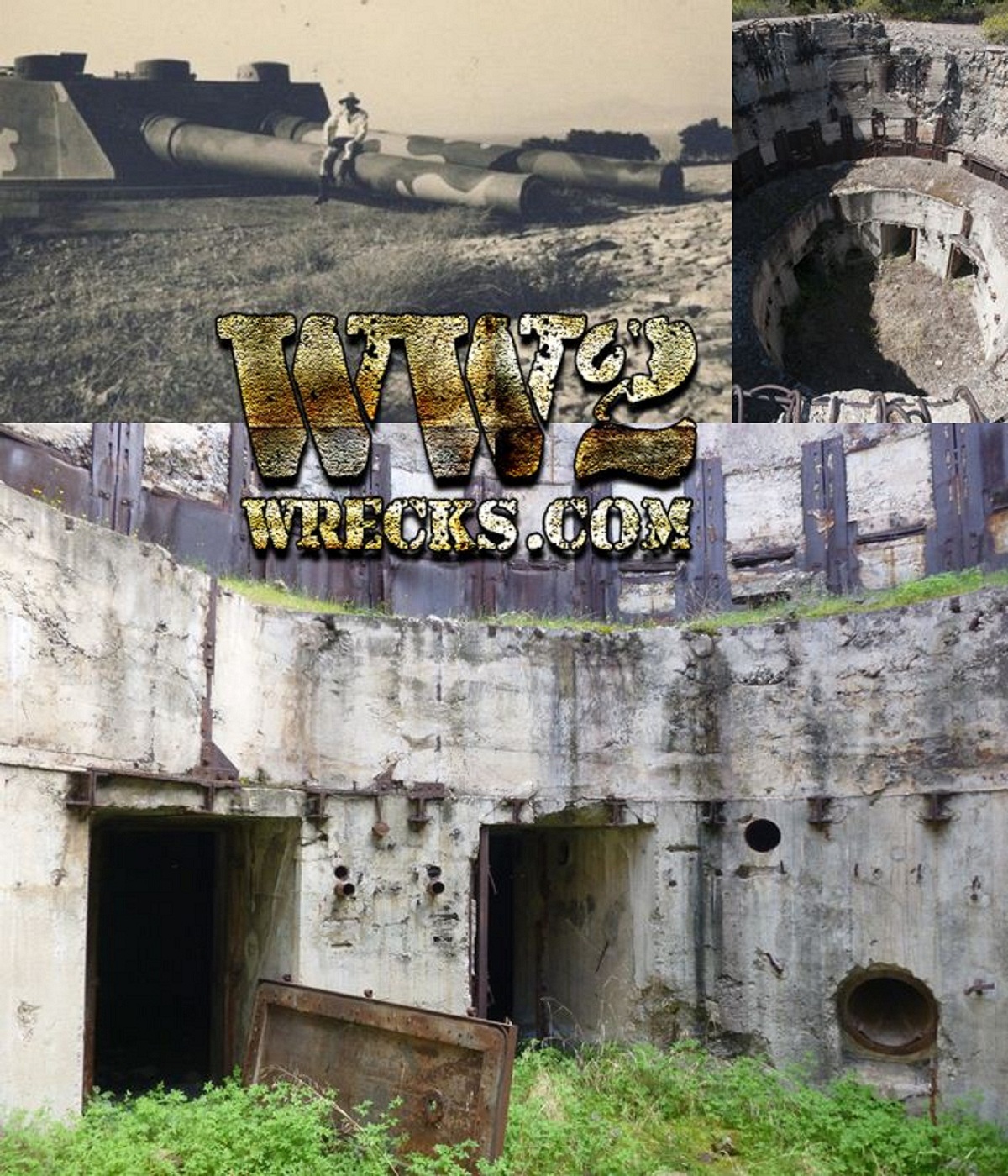 Photos and information submitted by researcher and author Konstantinos Kirimis, used by permission 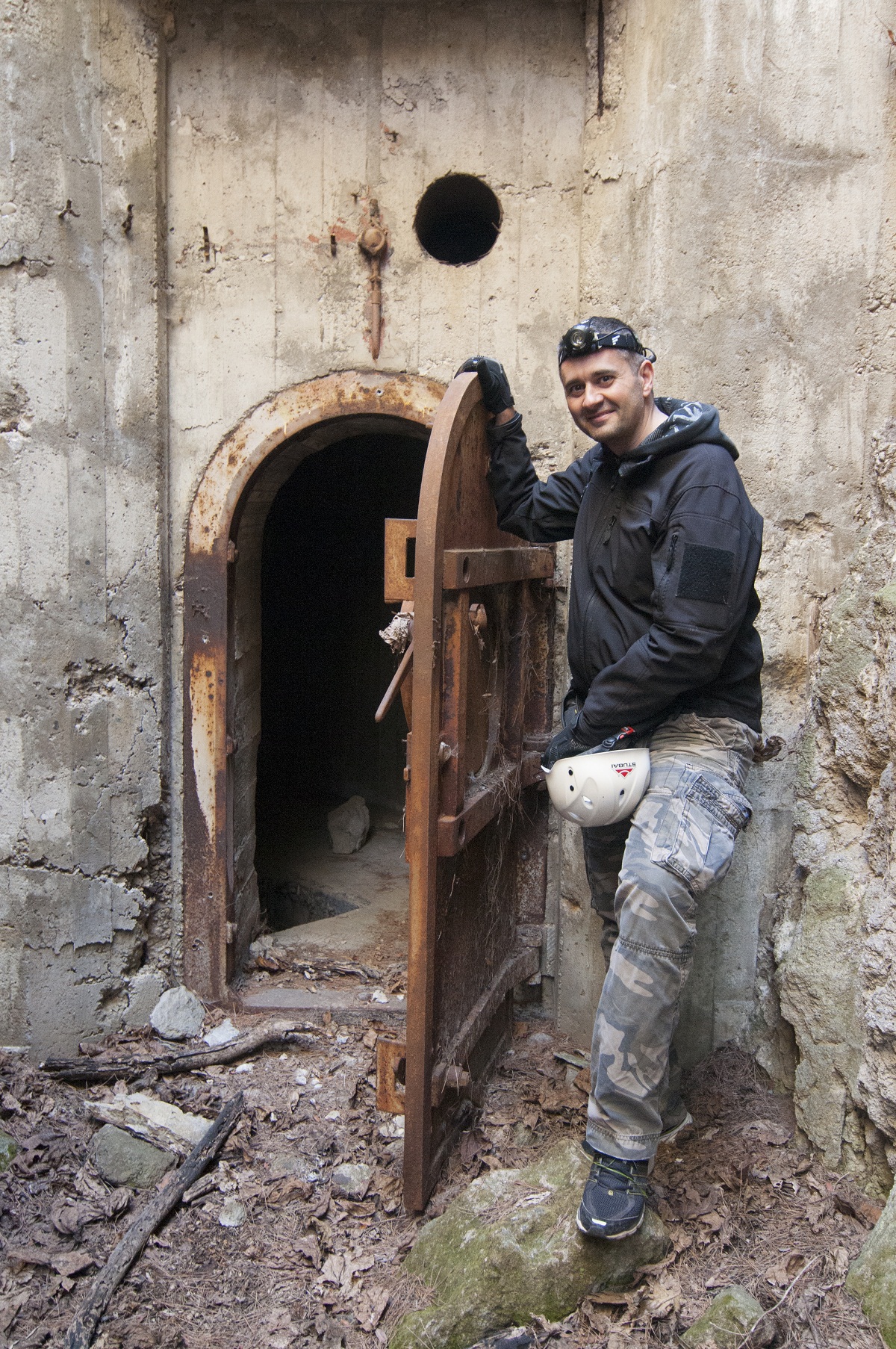 Check the links below IN RED for more stories by Konstantinos Kirimis:

The Greek Navy constructed a series of naval gun bunker emplacements in the period between 1936 and 1940, as the war was imminent, in order to control the access to the vital port of Piraeus, the main port of Athens, the capital of Greece.

Among those fortified positions was the North Aegina Fortress on Tourlos hill.

“The 305 mm naval guns emplacement in Tourlos is an impressive fortification project. Its dimensions cause awe and make us imagine how this bunker was 80 years ago.

I would personally wish to see this bunker complex restored, with explanatory drawings and photographs highlighting its historical background.

Such an initiative, in addition to a potential source of revenue for the local community, would demonstrate the Greek Navy’s land-based units and the important role they played during that historical period.

The naval artillery bunkers were equipped with 4 305 millimeters guns.

Despite the fact that those guns have now been removed, the remaining parts of the bunker complex and gun emplacements remain impressive, due to their sheer size and relatively good condition after almost 80 years since they were built.

The 305 mm naval guns were removed from the decommissioned battleship “Lemnos”, the former USS Idaho (BB24), the second ship of the Mississippi-class battleships, commissioned in 1908.

Sold to Greece in 1914 she was decommissioned in 1932, docked permanently at the Salamina Naval Base, until she was sunk in a German aerial attack in 1941.

Built on a strategic point, overlooking the seaways to  Piraeus and with a range of 18 kilometers, this naval guns emplacement was called an “unsinkable battleship”.

Each tower with the twin guns weighed 900 tons. Transporting them from “Lemnos” battleship up on Tourlos hill was a huge challenge, particularly considering the technological means of the period.

Ultimately, their dismantling, transport, installation and reassembly were successfully completed, which must be credited to the Greek Navy, which undertook this Herculean task.

Each tower  was positioned in prepared reinforced concrete bases, with a diameter of 10 metres and a depth of 8 metres.

Eventually, these guns did not fire a single shot, as the port of Piraeus was only attacked by air and no enemy naval forces dared to venture close to the area controlled by the gun emplacements.
With the capitulation of Greece in April 1941, the fortress came under German control, as part of “Seeverteitigung Attika”, who named it “Tourlos II”, in June 1941.

Prior to the demobilization of the Fortress though, the Greeks destroyed the guns, therefore it is not entirely clear as to which extent the Germans did make the guns operational again, although several period photographs (ranging from 1941 to 1944) show them manned by the MAA-603 (Marine Artillery Abteilung).

The two towers were 100 meters apart from each other and were able to rotate 360 degrees. The power was supplied by an underground “Central Power Station”, which was located approximately 250 meters from the nearest gun. 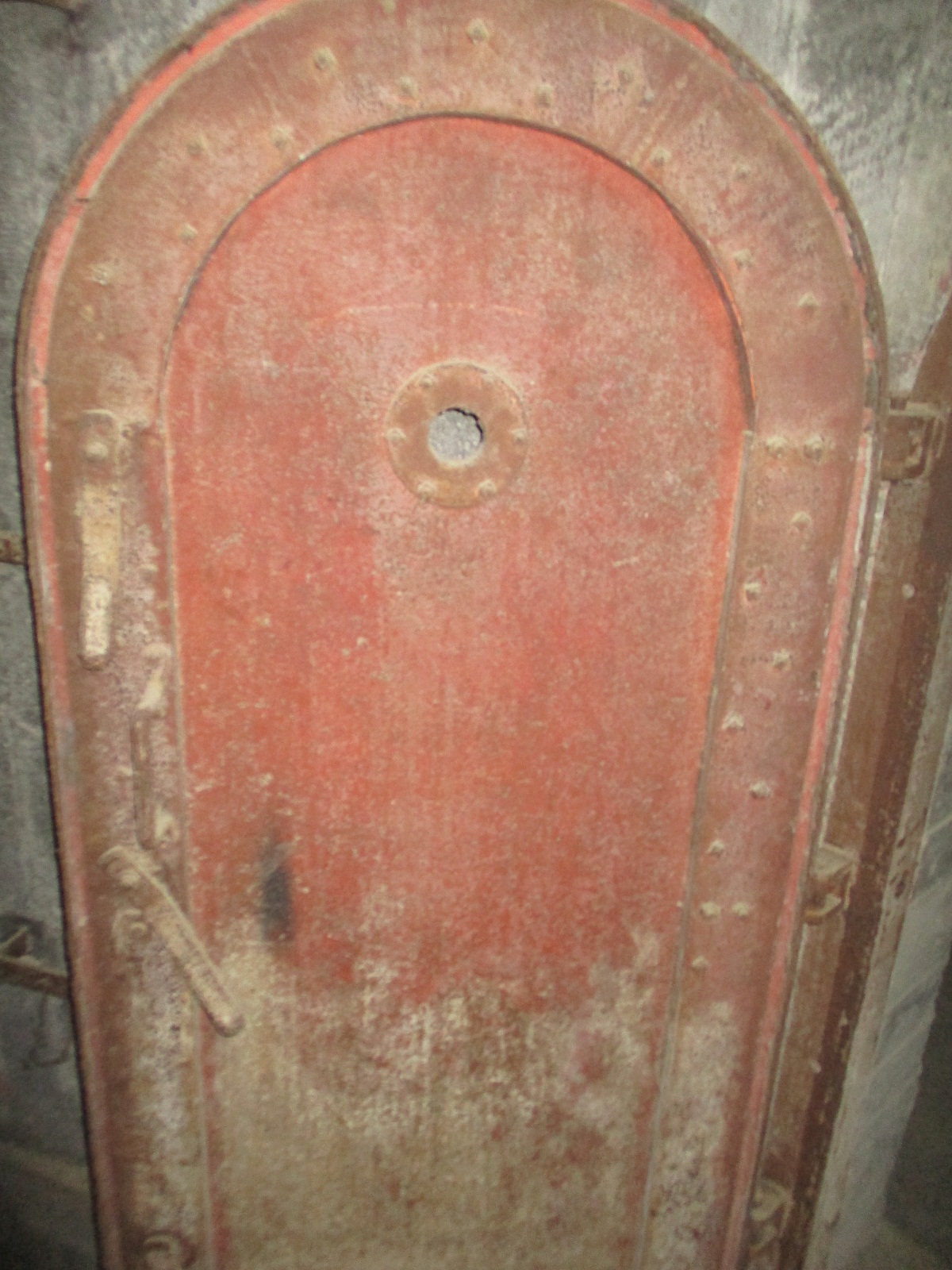 Three different types of steel doors within the underground complex. All have been removed from “Lemnos” Battleship (former USS Idaho) and used in the bunkers. 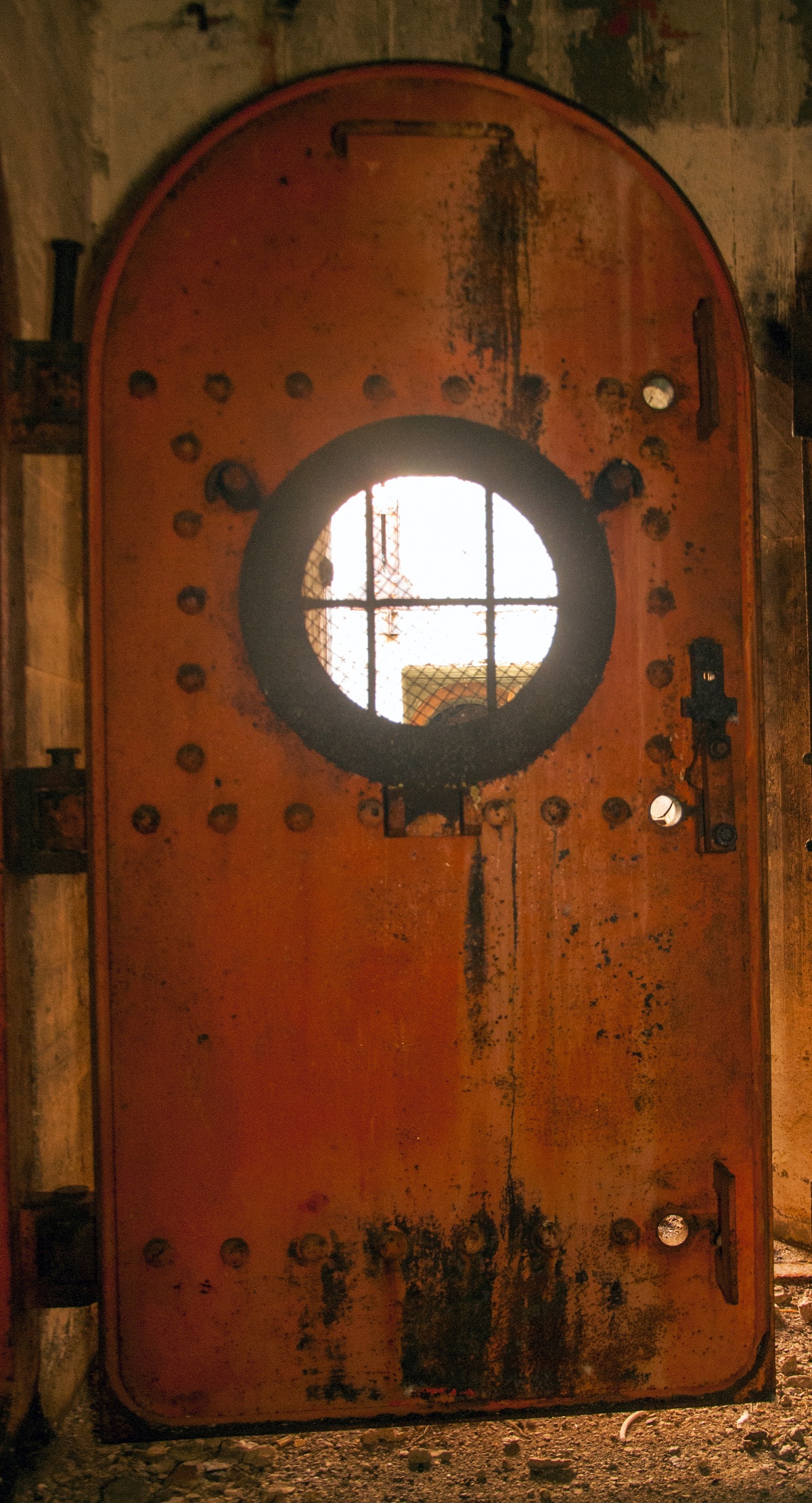 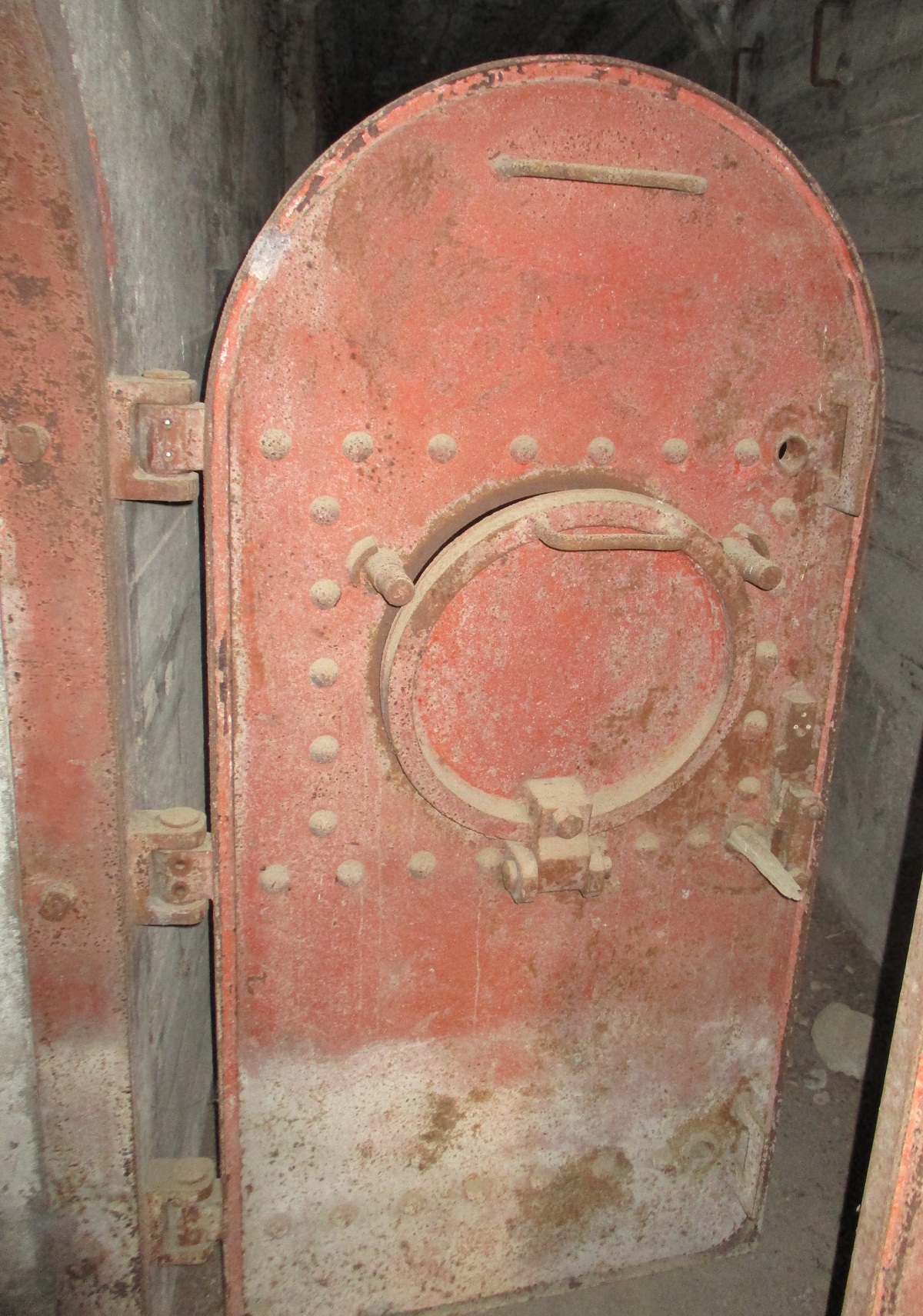 Around each tower and 10 meters underground, there were several reinforced concrete areas.
The entrance to each “complex” (tower and auxiliary spaces) was first made through a narrow corridor (about 15 meters long), carved on the sides of the mountain. Essentially, the builders had removed a “slice” from the mountain to allow access to the interior.

The entrance was protected by two heavy-duty, armored doors. Behind these doors, a 20 meter long arcade 20 meters lead to the actual gun tower.

All the areas, such as warehouses and shelters were protected by armored doors, which consisted of at least 5 different types and were removed from the “Lemnos” battleship.

Within the underground areas, there are several ventilation shafts and voice intercom tubes. The complex was made of reinforced concrete, while in some parts the roof was reinforced with steel bars. The height in the internal underground spaces was 2.5 to 3 meters. The area of each complex (entrance arcade, auxiliary spaces, gun emplacement) covered approximately 400 square meters.

The bunker complex is today in relatively good condition and remains particularly impressive. While the  absence of the towers and the guns, is certainly a minus, the visitor has the opportunity to perceive the sheer size of the bunker complex and to grasp the difficulty the engineers of the time faced in putting it together, as well as the guns’ effectiveness, having an unobstructed 360 degrees line of fire.

While the lighting installation is out of order, there are several wall-mounted wiring and shock lights. In several chambers there are remnants of cables, mechanical and electrical installations as well as spare parts and other WW2 items.

There is few rubble but the area is generally easily accessible. The red painting is preserved, in several armored doors, but also in different parts of the roof. Several of the doors are highly oxidized, and they are opened with difficulty, while others are deformed (probably by an internal explosion to destroy the complex, possibly by the retreating Germans in 1944).

Since the bunker complex is located in an area still controlled by the Greek Navy, no graffiti or litter are present, thus giving us a glimpse in the past.
Sources: Naval Review Magazine, No. 594 – Volume 176.

The author and researcher Konstantinos Kirimis wishes to thank the following:

• Hellenic Navy Fund
• Directorate of Customs and Public Relations of the Hellenic Navy
• Aegina Naval Base
• Yannis Arseniadis and Marios Michailos, for their assistance in the photo documentation of the Bunker Complex.