On 21 January 1944, Aikoku Maru loaded the 629 men of the 66th Naval Guard Unit, with ammunition, supplies and construction materials. 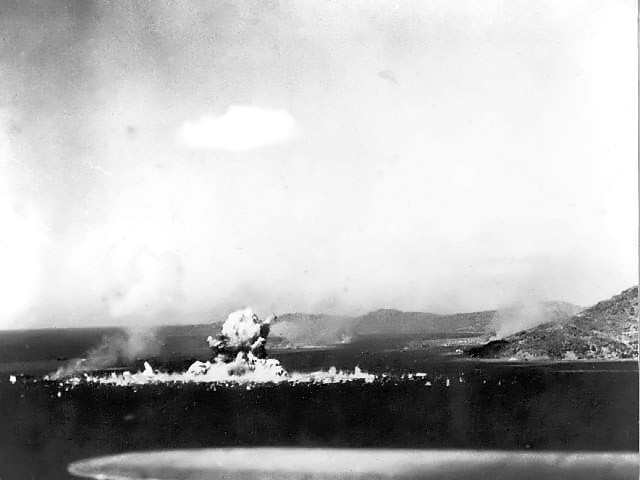 The convoy was attacked 300 nautical miles (560 km; 350 mi) NW of Truk by the submarine USS Trigger, which sank the minelayer Nasami and transport Yasukuni Maru; however, Aikoku Maru was undamaged and reached Truk on 1 February. 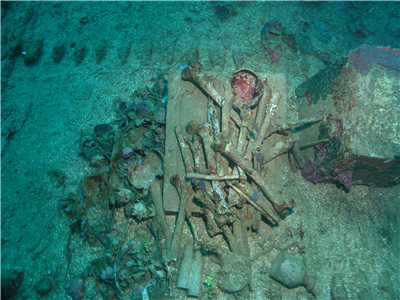 After making an abortive run to Brown Island, she returned to Truk on 16 February to find that most of the capital ships had evacuated the base in anticipation of an impending American attack.
Aikoku Maru began loading ammunition and making preparations for departure to Rabaul, loading troops of the 1st Amphibious Brigade. 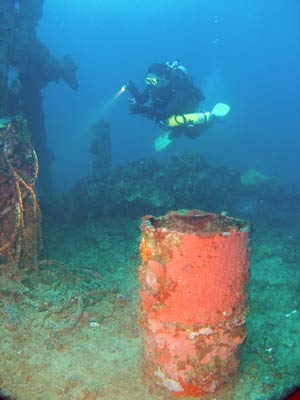 However, before preparations were complete, Operation Hailstone began, with the US Navy Task Force 58 striking at Truk with 30 air strikes of over 150 aircraft each every hour for a period of two days.
On the first day, 17 February 1944, Aikoku Maru was bombed by aircraft from the carrier USS Intrepid, with the first bomb exploding in the officer’s wardroom, causing a fire. 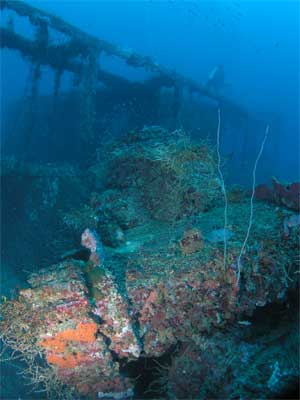 She was hit three more times in this attack, and was hit again in the second attack by a torpedo which set off the ammunition in her No.1 hold, shearing off the bow.
Aikoku Maru sank in two minutes at 07°22′N 151°56′E, with most of the 945 crew and passengers.
The aircraft which dropped the torpedo on Aikoku Maru- TBM Avenger #25270 and its three men crew of VT-6- were also destroyed in the explosion of the ship.
Aikoku Maru was removed from the navy list on 30 March 1944. 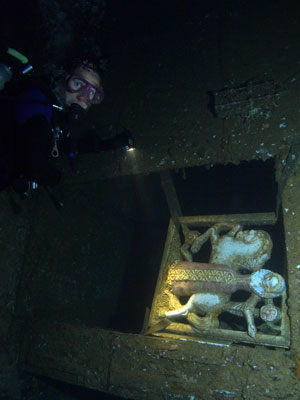 Michael McFadyen shares his experience diving with WW2 Pacific Treasures:
Scuba diving: Why did you start, when, which dive is your favourite and why?
Living near the water in Sydney, I have always spent a lot of time in the ocean, swimming, body surfing and snorkelling.
I grew up at a place called La Perouse on the northern side of Botany Bay and did a lot of snorkelling as a child there. 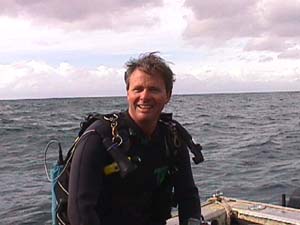 I finally learned to dive in 1988 after doing some resort dives in Tahiti. My favourite shore dive is Bare Island in Botany Bay, the amount of marine life is simply amazing considering it is in the middle of Australia’s largest city.
We see red Indianfish, sea horses, pygmy pipehorses and anglerfish, including the unique Bare Island anglerfish.
Diving at the I-1. This sub is of historical significance and despite the post-war destruction it sustained, it still is an amazing dive. Tell us of your feelings diving there and your impressions.
I dived the Japanese submarine I-1 back in 1992 on a trip to Guadalcanal in the Solomon Islands. It is a huge submarine which was sunk by two New Zealand corvettes during WWII.
Like most war wrecks, it is fascinating to dive due to the unique nature of the vessel. I love history of any sort and the story of the sinking by the Kiwis in their small ships was amazing. 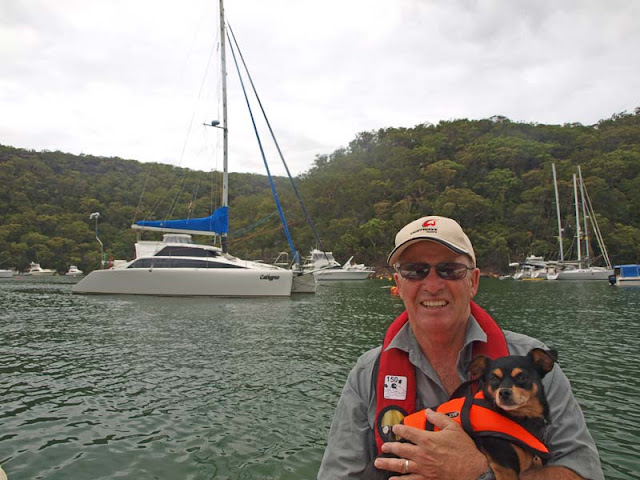 Before I researched it, most people believed that it was a totally different submarine, so I was happy that I was able to provide people with the correct information.
The Pacific was a theatre of fierce fighting between the Allies and the Japanese. have you dived any other WW2 wrecks and if yes which ones?
I have dived many countries throughout the Pacific, including Papua New Guinea, Vanuatu, Chuuk (formerly known as Truk, nowadays Federated States of Micronesia), Guam and the Philippines.
All of these places have significant war wrecks, even from WWI. Some of my favourite ones are the SS President Coolidge in Vanuatu, the USS Aaron Ward in the Solomons, and the San Francisco Maru in Chuuk.
All the wrecks in these places are great, but these ones stand out from the rest. I have also dived on the German WWI wrecks in Scapa Flow, Scotland. They were also amazing.
Tell us a bit about your experience diving with your other half and a memorable event you shared underwater.
I met my wife Kelly through diving when I went to give a talk to the dive club of which she was a member. Since then we have done almost 800 dives together.
We even got married at our favourite dive site, Bare Island. We have dived so many historic war wrecks together and nearly all our holidays are structured around scuba diving.
One dive that greatly affected both of us was on the Aikoku Maru in Chuuk. Over 700 crew died when it exploded and it has a very eerie feeling about it which we both felt.
Next plans: Any wrecks in your “to do list”?
Our next dive trip is towards the end of 2016 when we will be doing a trip at the top of Australia around Cape York (the pointing part).
There is an amazing wreck there called the Quetta which we will do as well as a few other wrecks and a lot of reefs.
We have mostly visited all the main WWII wreck locations shallower than 60 metres, the only place we might go to again is Coron in the Philippines.
CHECK MICHAEL MCFADYEN’S WEBSITE
401
2200
945
670
711
519