A new book by acclaimed researcher and author Lt. Col. (ret.) Hans Peter Eisenbach is published, featuring the history of Sturzkampfgruppe I./3 in 1941.

The book documents the history of Sturzkampfgruppe I./3, also known as the “Grazer Gruppe”, in 1941 and represents all 129 group operations that occurred during the attacks in Greece and Yugoslavia, the Mediterranean Sea and North Africa in 1941.

In the introduction of the book the years of development, the operations of the Graz group in Poland, France and England are briefly outlined.

The main part of the book deals with the relocation of I./StG 3 from France via Austria and Romania to Bulgaria and the use in the fight for the Metaxas Line, the attacks during the advance of the Wehrmacht in Greece, the missions against the Royal Navy, the battle  for air supremacy in the Aegean Sea, the Battle of Crete and the “Grazer Gruppe” operations in North Africa.

Additionally, the book looks into  1942 and 1943, with all related actions over Greece and the Mediterranean Sea.

Over 130 maps, situation overviews, organizational charts and drawings as well as numerous mostly unpublished and unknown photos complete the book, which will explain how the Stukas operated against the Metaxas line, against the Australian and New Zealand troops in Greece and against the Royal Navy around Crete.

The book is  German language, but will include over a 100 maps and illustrations which are important for any researcher of the period.

The air raids against Metaxas Line are covered with 15 maps and the Luftwaffe deployment in Greece is covered with 7 maps. 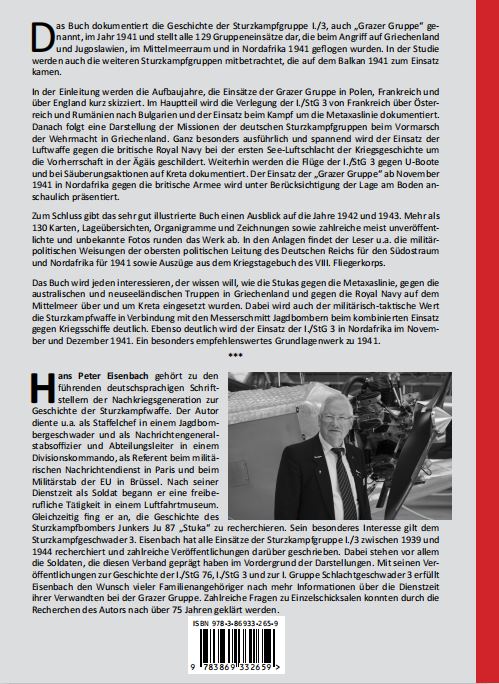