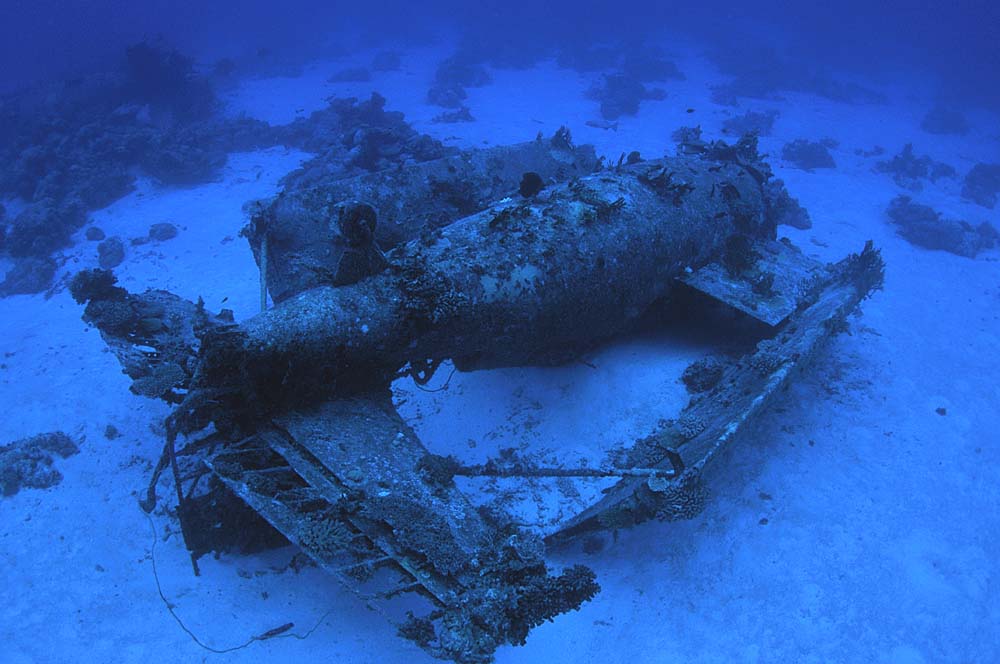 Manufactured by Grumman Aviation, the F4F Wildcat fighter was one of the most well-known American carrier aircraft of World War II. The Wildcat was the U.S. Navy’s first monoplane fighter, replacing biplane fighters that had been in service in the U.S. fleet prior to the introduction of the Wildcat.

Under the U.S. Navy designation system in World War II, the designation F4F stood for “fighter, fourth contracted fighter from Grumman,” and the last “F” was the letter assigned by the Navy to all aircraft built by Grumman. Numbers following the designation stood for different variants of the plane, such as F4F-3, F4F-4, and so forth.

The Wildcat was a single-seat fighter that carried up to six .50 caliber machine guns. It was ruggedly built, had armor protection for the pilot and other vital spots on the plane, and self-sealing fuel tanks.

This allowed the Wildcat to absorb battle damage that would have brought most other planes down. The Wildcat earned a distinguished record while in U.S. Navy, Marine Corps, Canadian, and British service during the war. A total of 7,885 Wildcats were built from 1940 until production ceased in 1945.

When Grumman needed its production facilities to concentrate on manufacturing the newer F6F ‘Hellcat’ fighter, production of the Wildcat was taken over in April 1942 by General Motors. GM-built Wildcats were given the designation “FM”, with the ‘M’ being the letter assigned by the U.S. Navy to all aircraft built by General Motors.

The FM-2 featured the same four-gun armament as the FM-1, a more powerful 1,360 horsepower engine, and a taller tail to offset the torque of the more powerful engine. These versions were sometimes called the “Wilder Wildcats”, and they proved ideally suited for operating from the smaller decks of U.S. Navy escort carriers.

The first American attack on Japanese territory took place on February 1, 1942, just under two months after the Japanese attack on Pearl Harbor. That was when the carriers USS Yorktown (CV-5) and USS Enterprise (CV-6) and their escorts conducted a hit-and-run raid on Japanese bases at two atolls, including Kwajalein Atoll, in the Marshall Islands. At that time, Wildcats were the first-line fighter aboard U.S. Navy carriers.

During Operation Flintlock, which took place in late January into early February 1944, nearly 70 Wildcats, operating from five escort carriers (classified as CVE’s), took part in the operation to seize the atoll.

There are at least six Wildcat wrecks in the lagoon at the north end of Kwajalein Atoll, near Mellu Island. It’s been widely assumed for many years that these planes were stripped and dumped into the lagoon following the end of World War II, when they were no longer needed. But the research that I have done during the past three years suggests another possibility.

A group called the Carrier Transport Squadron Pacific, which consisted of escort carriers, had the job of shuttling replacement aircraft, equipment, and personnel from the rear areas to carriers operating in the forward battle areas.

They also took damaged or over-age aircraft back to the rear for refurbishment or disposal. Theirs was a vital job, done mostly with little recognition or glory, but which was crucial in helping keep the forward-deployed carriers replenished with aircraft to replace losses, as well as replacement pilots and other supplies.

Examining the war diaries of the CVE’s assigned to the Carrier Transport Squadron Pacific, some deliveries were itemized. One example is the war diary of the USS Barnes (CVE-20), which shows that one FM-2P, which was the photo-recon version of the FM-2, was delivered to Roi on July 3, 1945. Other war diaries from different CVE’s are similarly detailed as to specific types of planes delivered to Roi, or picked up from there.

But the war diaries from other CVE’s assigned to the Carrier Transport Squadron are not as detailed. An example is the one for the USS Sitkoh Bay (CVE-86), which shows that on March 24, 1945, 32 aircraft were loaded aboard from Roi Island, but the diary does not specify the types of planes. Other war diaries for CVE’s in the Carrier Transport Squadron are similarly vague as to specific types of planes delivered to and picked up at Roi, merely giving numbers.

In addition to the war diary of the USS Barnes, other U.S. Navy records show that eleven FM-2’s were assigned to CASU-F-20 on Roi in February and March of 1945.

But none of this means that those planes were assigned operationally to Roi Island or Kwajalein Island. The only land-based Wildcats in the Central Pacific were those assigned to VF-99 at Eniwetok Atoll. VF-99 was the Replacement Air Group for the Central Pacific, responsible for helping train pilots who were headed to the front-line areas.

Part of the job of CASU-F-20 on Roi was not only the disposal of over-age and damaged planes that could not be repaired, but also to prepare brand-new aircraft for the rigors of front-line combat flying.

So, it’s entirely possible that the eleven FM-2’s recorded as assigned to CASU-F-20 in early 1945, as well as the one delivered by the USS Barnes in July 1945, were in fact delivered in order to be prepared for front-line flying, and then picked up later for transfer to CVE’s operating in the forward battle areas. 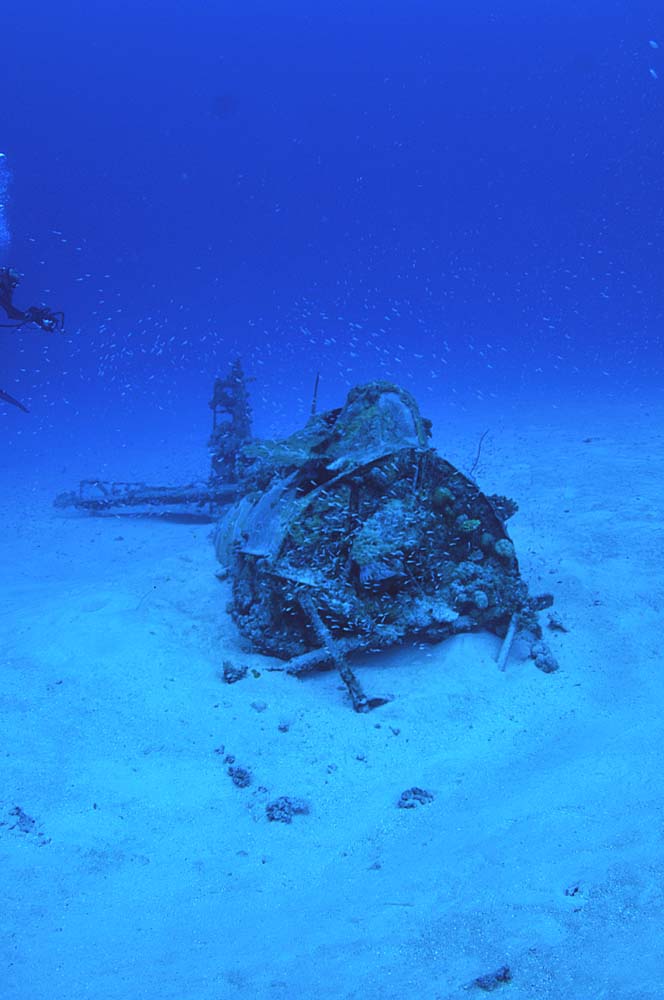 I have photographed six Wildcat wrecks in the ‘aircraft graveyard’ near Mellu Island. And it’s possible that there are more. One of the Wildcat fuselages lies on the lagoon slope in about 70 feet of water, while the other five Wildcat wrecks I’ve seen are further out into the lagoon and deeper.

It is a long swim to get out to where those other five Wildcats lie near each other. It leaves a short time for exploration, before the air supply in my scuba tank dictates that it’s time to turn around and head back to the dive boat.

Given the fragmented and incomplete information I have at this point, there is no way to tell with certainty where those Wildcats came from, or exactly when they were dumped in the lagoon. But I am working diligently to solve the mystery. When I do, I will have another article for this series with the information.

Regardless of where they came from or when they were dumped into the lagoon, the fact remains that there is no other place in the world where so many Wildcats can be seen so close together.

That area of the ‘aircraft graveyard’ near Mellu Island, like so many other spots in the Kwajalein lagoon, provides a glimpse into the past for divers lucky enough to be able to dive those wrecks.

The Wildcat wrecks in the Kwajalein lagoon, the examples in museums and flying the airshow circuits, plus the countless books, articles and documentaries about the Wildcat in both U.S. and British service, all help to preserve the history of the plane, and help honor the crews who maintained them, and the pilots who flew them during World War II.