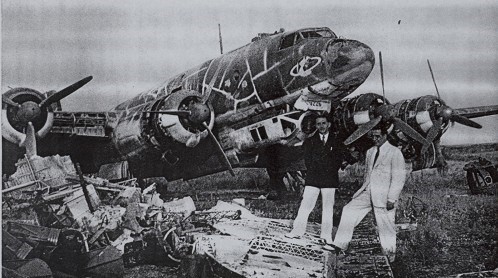 Research, photos and text by Danie van der Spuy, submitted to www.ww2wrecks.com and used by permission

One of the most beautiful WW2 aircraft the German Focke-Wulf Fw 200 Condor, also known as Kurier to the Allies (English: Courier), a German all-metal four-engined monoplane originally developed by Focke-Wulf as a long-range airliner.

Mr. Danie van der Spuy, whose father served with the South African Air Force in the Aegean, did an extensive research on this specific aircraft, as his father Lt DM van der Spuy was directly involved in making it airworthy again, with success, albeit for just a few minutes, as the Germans had contaminated the fuel with sand and the engines seized and were therefore rendered useless. After the war was over, the Condor, along with other aircraft left in Rodos, were cut in pieces by locals, in order to be used for their houses, cottages and other uses.

Here is the research by Mr. Danie van der Spuy, who kindly gave permission to www.ww2wrecks.com to publish it online for a worldwide audience:

My late father served in the SAAF during WWII. Years ago, he told me that at the end of the war, he, together with a few other engineers, were sent to a ‘Greek island’ to try and get a stranded ‘German plane’ airworthy again. The idea was to use the plane to transport their own troops back to the mainland.

Some years ago, I took another look at two of his photographs, and started doing research.

Luckily mom remembered that it was on the island of Rhodes (Rodos island). And looking at the pics, I realised that it was a Focke Wulf FW200 Condor, with Wellenmuster  camouflage. To identify the airfield, I used Google Earth. I also stumbled upon a site of one Kyprianos Biris. He is an architect (like myself), but his hobby is flying. He has lots of pictures of different airfields. I managed to identify the airfield as Kalathos, or Gadurra.

He also put me in touch with Luciano Berghini, who has a site dealing with airports of the Dodecanese. On his site is a different photograph of the same plane (in total disrepair), as well as pictures of the airfield, control tower…

I joined 12 O’Clock High, a huge site dealing with air forces during the WWII. I found a pic there of a FW200 under attack by 6 Beaufighters of 252 Sqn (31 March 1945). The plane, draped in white cloths, can be seen between the trees.

The plane survived, and left the island that same night (did not like being shot at!). Refer log at bottom.

12 O’Clock High was very helpful: I managed to find out the ‘Work Number’ of the plane, as well as the one my father was involved with. As well as the names of the crew, dates of arrival, departure…

I also found some other photographs of the immediate surroundings, and could pinpoint those through Google Earth.

There was a lot of speculation that the planes were used by the KG200 to transport spies, but, according to Luciano Berghini: “Here is the solution of the mystery: that was the last mail plane to reach the Dodecanese on 3 March 1944 and had to stay there because Vienna where it came from, was occupied by the Russians in the mean time. No plan to take Wagener or Nazis back! Only wounded and some officers were taken to Germany with these monthly flights. Even if the FW200 belonged to KG40 (which was disbanded on 2/2/44) it belonged to KG200.”

I also happened upon a model-building site, and found another photograph of the same plane. Posted by William Marshall. I then found out he is a Lt Col in Pretoria, South Africa!

O/Lt Stanke was OC of this unit (Kommando Kapiten). The Kommando had two Condors, the G6+FY, and the G6+AY. O/Lt Stanke was the pilot of the first Condor. Haupt. Ing. Link (the navigator) flew on every occasion to Rhodes.

The Condors have done five flights from Austria to Rhodes. Four of the flights were from Wiener Neustadt, whilst the last flight was from Horsching, near Linz.

They were taken prisoner after the fall of Rhodes

Jon Fletcher from Scotland wrote:
“My grandfather was stationed there in 1945 after the German surrender.

I think he was part of “10 SPS”, having transferred from 178 Squadron in Palestine.

The unit spent most of the time enjoying the island, waiting to be transferred to the Pacific or home. He remembers the airfield well.

There were 3 Fieseler Storchs and a single FW200 Condor: This (was) supposedly a mail plane, fuelled up to the brim. His unit managed to get 2 of the Storchs flying, which they used to jolly around the island in.

He recalls the Condor and its crew, having ‘captured’ them (i.e. gone to pick them up, to take them into captivity) with a fresh faced Officer just out from England.

The Hauptmann (German Captain) was ‘arrogant’ but the crew were nice lads and good to chat to.

They all had SS Hitler Youth daggers, but alas this fresh faced and green Officer let the crew keep them (not for long, no doubt, once they were handed over to the Army).

The Condor was left to the South Africans who managed to get it running:

They flew it around the airfield, before one of the engines packed in and they had to return to Kalathos: On closer inspection, the German crew had contaminated the oil with sand and the remaining engines were all damaged beyond safe use.”

Little known fact was that the islands of Greece where included in South African Air Force Operations. When South African military personnel landed on the island of Rhodes, Greece in 1945 they found this abandoned Condor FW 200 with its German markings painted out.

Of interest is the “world and circle” badge on the nose. This is the unit insignia of KG40 and commemorates the long distance flights and records made by the pre-war Lufthansa civil examples of the Condor.

This Condor was a FW 200 C-3/U7 model, WNr. 0226, with original Luftwaffe fuselage identifier code being DP+ON.

Later transferred to KG 100 in Italy, with fuselage identifier code changed to G6+FY.

Abandoned as unserviceable and captured at Kalathos ( Calato) airfield (also known as N. 806 Gadurra airfield by the Regia Aeronautica) on Rhodes.

This after an attack on this airfield by a section of six Beaufighters of 252 Squadron on the 31st March, 1945

Later that year there was an Officers Evening (OE) at the Albergo Terme Hotel, in Vittorio Veneto, Northern Italy. Dad saved his menu. Some interesting translations!