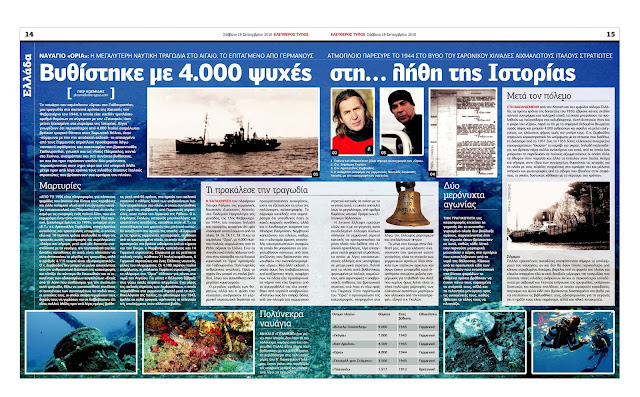 The sinking of the steamship “Oria” in Gaidouronisi, a tragedy in the dark years of the nazi occupation of Greece in February 1944, which  resulted in 4,115 drowned Italian POWs, almost three times as many victims as the Titanic, is largely forgotten and kept in the dark drawers of history.

Few people know that more than 4,000 Italian prisoners were tragically drowned in the Saronic Gulf, close to Athens, where, according to the most accurate version of events, the requisitioned by the Germans steamer collided, due to a shipping error and bad weather conditions, on Gaidouronisi islet known also as Patroclus Island, near Sounion, on the southern tip of Attica.

The “Oria” capsized and then sank, though not before  almost two days and nights had passed, taking with her to a watery grave and oblivion until a few years ago, over 4,000 unfortunate Italian soldiers who were kept prisoners in the cargo hold of the ship.

“Since 1996 I had information from some fishermen who caught in their nets mess tins and other war material from an unknown wreck southeast of Patroclus.

I combined this information with reports of an old diver who had described a place full of debris and human remains in the same area and we started investigations in 1999″ Mr.Zervoudis, a professional diver and amateur historian said.
Zervoudis followed for some ten years the tragic thread of this disaster of epic proportions:
“Even today, after a decade of involvement in the identification of the shipwreck and dozens of dives there, it is impossible to grasp the magnitude of the tragedy, just the number of 4,115 drowned POWs is one of the biggest naval tragedies of all time!”

Mr. Zervoudis cannot remain unmoved by the humanitarian dimension of the disaster, and hopes that soon the families of the tragic prisoners will be vindicated:
“In addition to the regret I feel for the unspeakable tragedy, I finally met the families of missing persons, their children, their wives, who are still waiting for news on what happened to their loved ones and I assure you that there are still many, after all these years who await for information.”

Mr. Dimitris Galon, historian and musicologist, provided the survey results after searching the archives of the era:

Approximately 4,100 Italian prisoners, the remaining German soldiers and the crew of the “Oria” drowned.

For months, the sea washed up on shores close to the shipwreck thousands of drowned Italians.
A great part of the Italian army in the Dodecanese, which surrendered to the nazi Germans after the capitulation of Italy in autumn 1943, was destined to perish tragically.”
What caused the wreck?
According to the nazi Maritime Administration of Attica, on February 13, 1944, “one convoy consisting of ships TA 16, TA 17, TA 19 and the steamer “Oria” with approximately 4,000 Italian prisoners from Rhodes, passed from Cape Sounion.

While accompanying ships were fighting against the storm and the huge waves, the “Oria” ran aground in Gaidouronisi. Very high number of casualties. Currently cannot send help, because of the bad weather conditions.”
The large number of victims, but also the circumstances of the shipwreck, forced the nazi military command to carry out investigations in order to examine the causes of the disaster.

The findings concluded that bad weather and the miscalculation of the Norwegian captain of the ship Bjorn Rasmussen were the main causes of the shipwreck.

The Germans failed to send any rescue vessels in the area, which could have saved at least some of the survivors who were in the cargo holds of the “Oria”.

Another version, which was not confirmed by independent sources, says the boat either hit a mine or was torpedoed by a submarine. 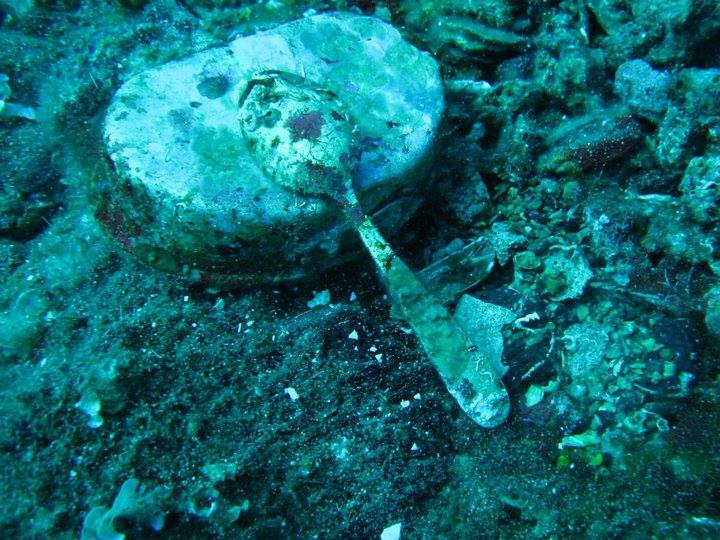 “The “Oria” shipwreck is the largest navy tragedy in the Greek seas and one of the biggest worldwide.

The acute shortage of raw materials led the German occupation army to use the only ships available in Greek archipelago and commandeered old cargo steamers.

Many of these ships sank, loaded with Italian prisoners by air or underwater attacks of the Allies, while they were en route to Piraeus, the Port of Athens.

All that we have at our disposal, are the nazi German archivesand few data from Italian archives” Mr. Galon says.
The vessel, after hitting the rocks on the island of Gaidouronissi, did not sink immediately, thus prolonging the agony of those who were trapped in it, as every minute that passed reduced air in the hold which was gradually flooded.
Some of the personal effects of the soldiers identified in fishing nets in the coming years, were found to have on them inscribed their names, and the last messages to their families as they watched their end approaching.
After the war

Greece was plagued by the nazi German Occupation and after that the Civil War which lasted until 1949.

In the 1950s Greece was full of wreckage and war material, which could be sold as scrap to steel factories.

This unfortunately was the fate of the “Oria”, although by today’s standards it is considered a tomb and monument for over 4,000 people and must be left untouched, as a minimum tribute to their memory.

Mr. Zervoudis notes that “according to the information that I have, from 1951 to 1953 divers salvaged the ship for scrap and found too many objects and human remains, which they handed over to Italian authorities, while others were buried on the beach.”

Today
Many amateur divers today visit the remains of the wreck, but will not see anything more than some bent beams, barrels of the ship’s cargo and bones scattered here and there, mute witnesses of the tragedy that struck so many thousands of people.
Although most divers are respectful and mindful of the tragedy, there are unfortunately some idiots who steal mess tins and other personal belongings of the drowned Italians that are scattered on the seabed, in order to decorate their libraries, ignoring the fact that this is not only unlawful but also morally reprehensible.
Fatal wrecks
While everybody knows the Titanic, it was not the most deadly shipwreck. Many other ships were sunk with thousands of victims, most in the last days of World War II, and have been left out of historical memory with comparatively few know about them.
The biggest naval tragedies of the 20th century
Name of ship-Number of victims-Year-Nationality
Wilhelm Gustloff 9000 1945 German
Goya 7000 1945 German
Cap Arkona 4500 1945 German
Oria 4000 1944 German
General von Steuben 3500 1945 German
Titanic 1517 1912 UK
698
3026
1148
989
1057
826