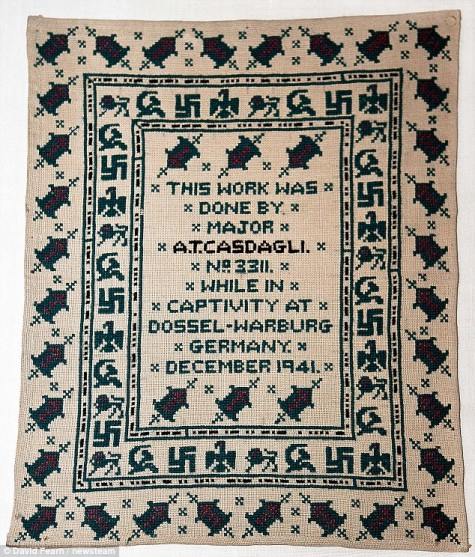 By Trevor Solley
Imprisoned by the old enemy for four years during World War Two, Major Alexis Casdagli never lost his fighting spirit up with his own cheeky form of resistance, adding the secret messages to his needlework which were never spotted by his Nazi captors.
Pinching red and blue thread from a disintegrating pullover belonging to an elderly Cretan general, Casdagli passed the long hours in captivity by painstakingly creating the sampler in cross-stitch. 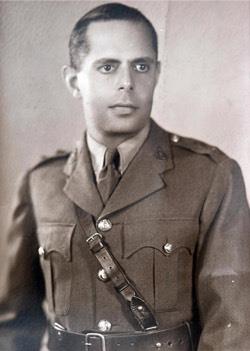 The passive resistance, ironically displayed in such a gentle pastime, could have put the prisoner of war’s life in jeopardy.
But instead of spotting the comments, his Nazi captors put the canvas on display in the castle where he was being held and subsequently three other prison camps.
At first glance the painstaking needlework doesn’t look offensive, and the main message reads “This work was done by Major A. Casdagli. No. 3311. While in captivity at Dossel-Warbung Germany December 1941”.
Sewing for men: Believe me, chaps, sew and ye shall reap 07 Apr 2013
But around the outside of the decorative symbols which surround the message, an innocent looking set of dots and dashes is actually morse code.
And the hidden message spells out Casdagli’s defiant message to his unwitting Nazi captors:
“God Save The King” and “Fuck Hitler”.
The sampler, which was recently on display at the Victoria and Albert museum, was this week reunited with Mjr Casdagli’s son, Tony.
“My father always said that the red cross packages her received kept him alive, but the sewing kept him sane,”
said 79-year-old Tony.
“He was captured at the battle of Crete and marched up Greece for six weeks before being flown to north Germany.
“Having run a textiles company before the war he knew a little about sewing, so when he was given a canvas by another prisoner he started stitching for something to do.”
Alexis was held along with a Greek general, from whose dress jacket Alexis pulled the threads he used to stitch the sampler.
“The Red Cross wouldn’t give care packages to captives until they had been held for over a year ,” said grandfather-of-five Tony.
“So my father had to pick threads from items of clothing. Eventually he was able to ask for thread and canvas in his packages.
“He was so good at it the Germans had him giving classes to his fellow officers, but the Germans never worked out his code.”
When Tony was 11, he received a stitched letter through the post. “It is 1,581 days since I saw you last but it will not be long now. Do you remember when I fell down the well? Look after Mummy till I get home again,” Casdagli laboriously spelled out with finely stitched letters.
In a bleak, claustrophobic part-map and part-diagram, his father created a needlework of “Room 13, Spangenberg castle”.
“At the bottom was a Union flag, added Tony. “National flags were forbidden in the camp, so Casdagli sewed a canvas flap over it with “do not open” written on it in German.
“Each week the same officer would open the flap and say, ‘This is illegal,’ and Pa said, ‘You’re showing it, I’m not showing it.'”
Major Casdagli was held captive between June 1941 and April 1945, his time captive split between four different prisoner of war camps.
After the war Alexis’s textile business folded and he joined a British mission to Greece during the civil war as a non combatant before starting a perspex factory in London.
He kept up is stitching habit until his death in 1990, at the age of 90, and his son joined him regularly to spend time together sewing. 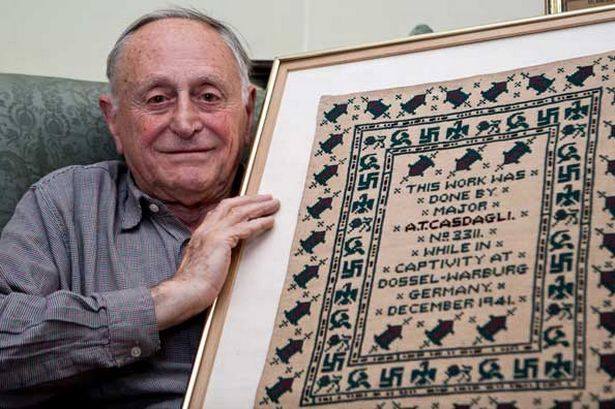