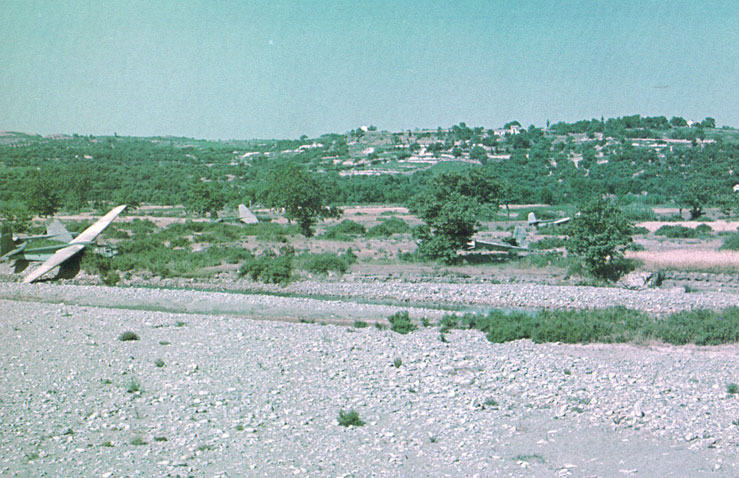 At 08:00 on 20 May 1941, German paratroopers, jumping out of dozens of Junkers Ju 52 aircraft, landed near Maleme airfield and the town of Chania.

The Germans suffered many casualties in the first hours of the invasion, a company of III Battalion, 1st Assault Regiment lost 112 killed out of 126 men and 400 of 600 men in III Battalion were killed on the first day.

Most of the parachutists were engaged by New Zealanders defending the airfield and Greek forces near Chania.

Many gliders following the paratroops were hit by mortar fire seconds after landing and the glider troops who landed safely were almost annihilated by the New Zealand and Greek defenders.

Towards the evening of 20 May, the Germans slowly pushed the New Zealanders back from Hill 107, which overlooked the airfield.

As night fell, none of the German objectives had been secured. Of 493 German transport aircraft used during the airdrop, seven were lost to anti-aircraft fire. The bold plan to attack in four places to maximize surprise, rather than concentrating on one, seemed to have failed, although the reasons were unknown to the Germans at the time.

Overnight, the 22nd New Zealand Infantry Battalion withdrew from Hill 107, leaving Maleme airfield undefended. During the previous day, the Germans had cut communications between the two westernmost companies of the battalion and the battalion commander, Lieutenant Colonel Leslie Andrew VC, who was on the eastern side of the airfield. The lack of communication was assumed to mean that the battalion had been overrun in the west. With the weakened state of the eastern elements of the battalion and believing the western elements to have been overrun, Andrew requested reinforcement by the 23rd Battalion.

Brigadier James Hargest denied the request on the mistaken grounds that the 23rd Battalion was busy repulsing parachutists in its sector. After a failed counter-attack late in the day on 20 May, with the eastern elements of his battalion, Andrew withdrew under cover of darkness to regroup, with the consent of Hargest.

This misunderstanding, representative of the failings of communication and coordination in the defence of Crete, cost the Allies the airfield and allowed the Germans to reinforce their invasion force unopposed.

In Athens, Student decided to concentrate on Maleme on 21 May, as this was the area where the most progress had been made and because an early morning reconnaissance flight over Maleme airfield was unopposed. The Germans quickly exploited the withdrawal from Hill 107 to take control of Maleme airfield.

In the afternoon of 21 May 1941, Freyberg ordered a counter-attack to retake Maleme airfield during the night of 21/22 May.
The 2/7th Battalion was to move 18 miles (29 km) north to relieve the 20th Battalion, which would participate in the attack. The 2/7th Battalion had no transport, and vehicles for the battalion were delayed by German aircraft.

The delayed counter-attack on the airfield came in daylight on 22 May, when the troops faced Stuka dive bombers, dug-in paratroops and mountain troops.

The attack slowly petered out and failed to retake the airfield, which forced the defenders into withdrawals to the eastern end of the island, to avoid being out-flanked.