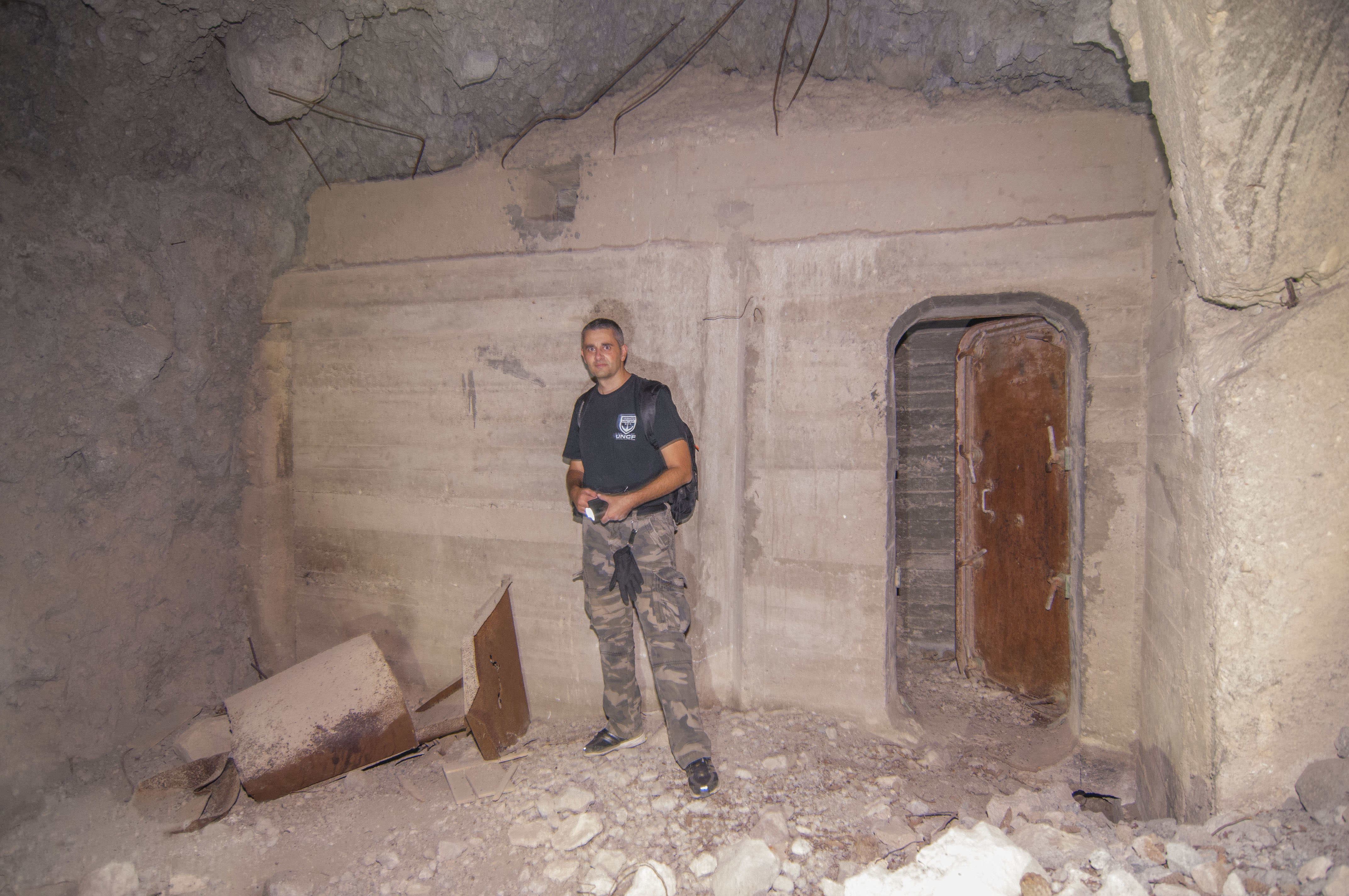 Research and photos by Konstantinos Kirimis, submitted to www.ww2wrecks.com and used by permission

Among the various bunkers and fortifications built by the German occupation forces all over Greece during World War 2, this specific “cave-shelter” (Hohlgangsanlage, according to the German technical terminology of the time) is located in the Northern Fortress of Aegina (see Note 1, below).

Apart from its size, it stands out for a number of other reasons:

First, due to its special construction style (a mix of carved portico and classic shelter).

Second, because it is one of the few German shelters, which still remains largely intact, including the authentic steel door of that time.

The shelter is probably the work of Marine-Festungs-Pionier-Bataillon 330 (see Note 2, below).

We could divide this shelter into two distinct parts that are joined together.

The first is a typical German shelter, made of reinforced concrete.

The second, consists of a set of tunnels, carved into the ground.

The carved tunnels are very spacious, with a width of 2-3 meters and a height of 3-4 meters.

Their total length is about 50 meters.

At one point, there are holes in the walls, suggesting the use of dynamite for a further opening of the galleries, which was never completed.

It is not clear whether all the galleries were intended for future concrete cladding.

Along the galleries, in some places on the ground, there are small (wooden or metal) piles, sunk into the ground.

They are hardly discernible. They may have been used to trap (with explosives) the area, after the departure of the Germans.

The main shelter (concrete section), consists of a central chamber (3×9 meters) and a small vestibule (1×3 meters). Its roof is semicircular and the height is close to 3 meters.

On the sides of the walls there are traces of folding metal beds.

So we are quite confident in concluding that it was probably a staff shelter.

This hypothesis is reinforced by the existence of a large calibre artillery position at a short distance. Most likely this shelter was specifically built for the gun crews.

There are 3 entrances. The first is at the beginning of the tunnel.

The other two are lined with concrete, have a semicircular roof, 15 meters long and consist of concrete stairs that lead 10 meters below the surface.

They are located at both ends of the concrete part of the shelter.

At their ends, one can see the great thickness of the concrete, to understand how these structures are maintained in such good condition, 70+ years after their original construction.

At the point where the main shelter joins the portico, it is protected by a steel door, which was sealed at 8  points.

It did not have an observation hole (“eye”) while in the center there was a small metal handle.

It is also interesting that it opened on the opposite way, compared to the Greek ones of the period.

In the vestibule, there are also traces of plumbing. The area of the shelter is about 200 square meters.

The shelter is in moderate condition.

From a structural point of view, there are no particular signs of stress. Inside the built-up section there are a few rubble and some items such as a bucket, a rusty construction trolley, wood, etc.

Inside the tunnels, there are some points with large stones, apparently due to the partial collapse of the roof.

One of the two concrete staircases is in a very bad condition and since the stairs have been corroded, the movement must be done with extreme caution.

The movement at this point is even more difficult, due to the concentration of dry pine needles, which form a kind of “slippery carpet”.

Surprisingly, there is still a metal door to the shelter.

In fact, this is a very rare case of an intact authentic steel door in a German shelter in Attica.

Nowadays, the shelter hosts a large colony of bats, which did not seem to be particularly excited by our visit to the site.

1: North Fortress of Aegina , in the area of Tourlos. It was built by the Greek Navy (1936-1940) with the aim of controlling the sea lanes to Attica. After the capitulation of the country, it came under German occupation.

2: “Marine-Festungs-Pionier-Bataillon 330” (“330 Engineer Battalion – Naval fortifications”). The battalion was established in June 1942 in Greece, with the aim of building naval fortifications. Most of his squads undertook projects in the Athens-Piraeus area, while others were sent to Thessaloniki, Milos island and Heraklion, Crete. The unit retired from Greece in 1944.