Lt. Colonel (ret.) Ilias Kotridis has dedicated his life and efforts unearthing the lost secrets of the “Metaxas Line”, a complex of concrete bunkers and fortresses that withstood the German invasion. 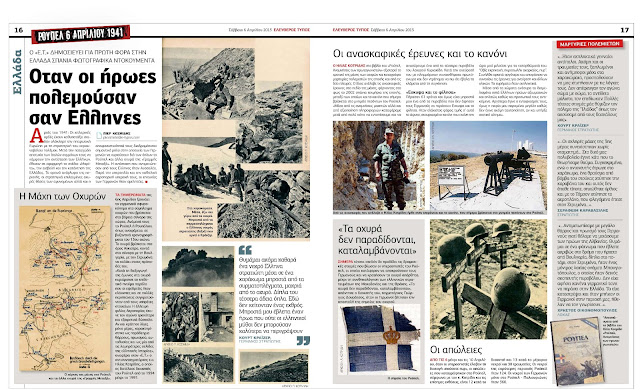 The Germans launched their attack on April 6, 1941 and the Greek army stationed at the bunkers caused a significant number of casualties to the invading forces that stormed Greece from the northern borders with Bulgaria, a country that had sided with nazi Germany.
The number of casualties, including, dead, injured and missing in action, according to a variety of sources, is over 2,500 Germans and approximately 1,000 Greeks. 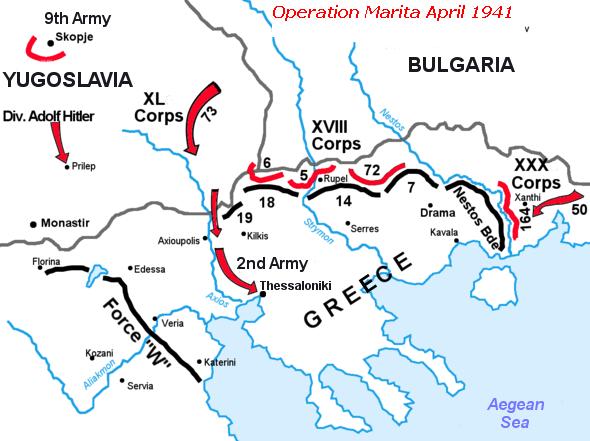 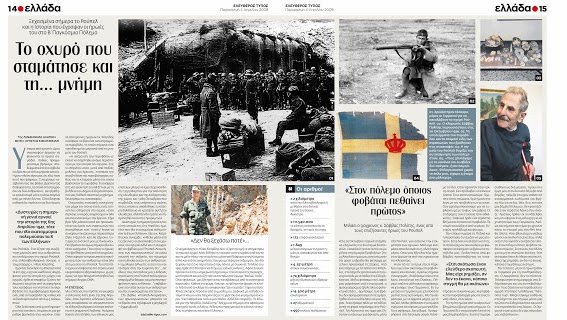 Lt. Colonel (ret.) Ilias Kotridis is credited with locating an artillery piece of a battery which played a significant role during the Battle:
“Back in 2002, after consulting with WW2 veterans who served at Roupel bunker complex, I managed to locate and unearth one of the four artillery pieces belonging to the “Kyriakidis Battery”.
It was a very emotional moment for me, after 61 years we found the gun, along with the remains of the Greek soldiers that fought and died there”.
Lt. Colonel (ret.) Ilias Kotridis vividly remembers an incident that happened back in 1995, when he was the Commander of Roupel fortress, which is now a Museum.

“In May 1995, a group of visitors came to Roupel. Among them was an old man on a wheelchair. After listening to the order of battle and other details related to the struggle, he came closer and asked me to take him to “Molon Lave” hill. [Molon labe (Greek: μολὼν λαβέ molṑn labé), meaning “come and take them” , is a classical expression of defiance. According to Herodotus, when the Persian armies demanded that the Greeks surrender their weapons at the Battle of Thermopylae, King Leonidas responded with this phrase.]

Lt. Colonel (ret.) Ilias Kotridis continues: “At first, I was at a loss as to why he asked me to take him there. Once we got at “Molon Lave” hill, he asked us to leave him on the ground. He sat on the soil, he started weeping and kissed the ground.
“It’s OK” I heard him say. I still wasn’t sure why he got so emotional. The old man looked at me and said:

“Can you see that old fortifications over there? This is were my two legs are, I lost them during the fighting with the Germans. But it’s OK, what I did was for my country and family.”
The Battle of the Metaxas Line (Kampf um die Metaxas-Linie), also known in Greece as the “Battle of the Forts”  was the first battle during the German invasion of Greece in April 1941, during World War II.
Read HERE: April 1941: When the Greeks stopped the nazis at the bunkers of “Metaxas Line”

Read HERE: April 1941: Operation “Marita” and the Greek “Maginot Line” that cost the nazi Germans dearly
Following the stalemate of their Italian allies in the Albanian front and the victories of the Greeks in the mountainous regions of northern Greece and Albania against the Italian army, since the unprovoked attack of fascist Italy on October 28th, 1940, which signaled the entry of Greece in World War Two, the paranoid German dictator Hitler initiated the preparation for Operation “Marita”.
General Ioannis Metaxas, the Greek dictator-prime minister who died shortly before the German invasion of his country, had initiated this construction project in the summer of 1936.
Its strongest part extended over a distance of  200 kilometres (125 miles) from the mouth of the Nestos River to the point where the Yugoslav, Bulgarian, and Greek borders meet.

The fortresses within this defense system blocked the road that led through the basin of Nevrokop and across the Rupel Gorge to eastern Macedonia.

The strength of the Metaxas Line resided not so much in its fortifications proper as in the inaccessibility of the intermediate terrain leading up to the defense positions.
The Greek fortifications along the border had been skillfully adapted to these terrain features and a defense system in depth covered the few available roads. No continuous fortifications had been erected along the Yugoslav-Bulgarian border, but road blocks, demolitions, and extensive mine fields had been prepared at all border points.

The German plan of attack was based on the premise that, because of the diversion created by the campaign in Albania, the Greeks would lack sufficient manpower to defend their borders with Yugoslavia and Bulgaria.

The full frontal attack on the Metaxas Line, undertaken by one German infantry and two reinforced mountain divisions of the XVIII Mountain Corps, met with extremely tough resistance from the Greek defenders.

The Metaxas Line was a chain of fortifications constructed along the line of the Greco-Bulgarian border, designed to protect Greece in case of a Bulgarian invasion after the rearmament of Bulgaria.

It was named after Ioannis Metaxas, dictator and Prime Minister of Greece, and chiefly consists of tunnels that led to observatories, emplacements and machine-gun nests.

The constructions are so sturdy that they survive to this day, some of which are still in active service. Some of them are open to the public.

Some of the fortresses of the line held out for days after the German attack divisions had bypassed them and could not be reduced until heavy guns were brought up.

The following 21 forts make up the Metaxas Line, ordered from West to East along the Greco-Bulgarian border.

German General Wilhelm List, who led the attack against the Metaxas Line, admired the bravery and courage of these soldiers.
He refrained from taking the Greek soldiers prisoner and declared that the army was free to leave with their war flags, on condition that they surrender their arms and supplies.
He also ordered his soldiers and officers to salute the Greek soldiers (Beevor 2005, p. 20).
The line was also poorly manned as most of the Greek Army was fighting against the Italians, on the Albanian frontier.
The Metaxas Line consists of 21 independent fortification complexes, the largest of which is Fort Roupel as it covers 6.1 out of the 155 km of the full line and had been constructed at a height of 322 m.
Illumination was initially mostly provided by oil-lamps, although generators were also installed.
(Currently, the fortifications are supplied with public electricity, but they are also equipped with generators).
Ventilation was achieved both naturally and artificially. Water was supplied via water-mains.
The fortification works lasted four years and their cost at the time reached 100,400,000 drachmas.
727
3105
1183
1016
1094
865