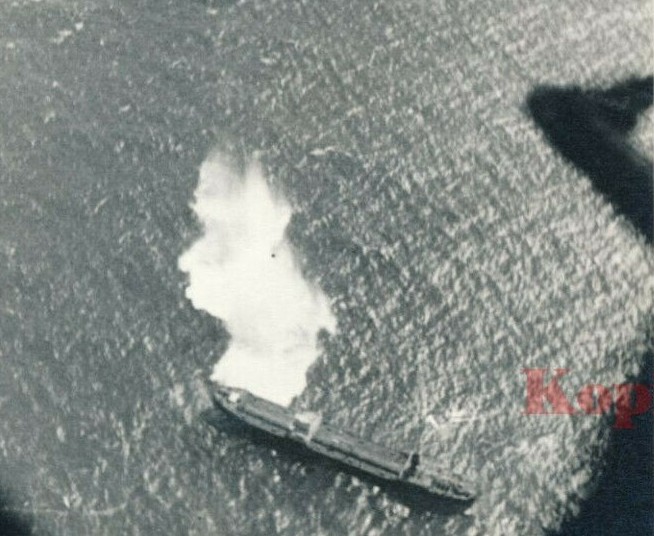 Research and photos by George Karelas, used by permission

The chaotic days just before and during the German invasion of Greece, which was initiated on April 6, 1941, codenamed “Operation Marita”, have seen the Luftwaffe enjoying total air superiority.

This meant that the German aircraft dominated the skies and bombed, without any significant opposition, any targets they would choose. Dozens, if not hundreds of ships were sunk or damaged during those days, many of which have now been forgotten, as no visual identification of their bombings appears to have survived the war.

Respected researcher and scuba diver George Karelas from Greece has painstakingly put together the bits and pieces of information over the last 15 years and has managed to identify many such events during World War 2 in Greece, thus enabling us to look into the sheer terror of the sailors, when they were subjected to air attacks by the mighty Luftwaffe.

His most recent discovery is the possible identification of the air attack against the Norwegian tanker MT Solheim, on March 24th, 1941.

My research started over 15 years ago and has helped me to identify more than 20 cases to date, mainly using the coastline to confirm my hypotheses.

As this ship was bombed in the open sea, there was no coastline in view and therefore I classify my findings in the category of possible identification.

The very large 8,070 ton tanker Solheim was built at the Nakskov Skibsværft A/S shipyard in Denmark in 1934. It was 140 meters long and 18 meters wide and was powered by 2 six-cylinder diesel engines.

On March 24, 1941, shortly before the famous naval battle of Cape Tainaron, or battle of Cape Matapan, as it is widely known, MT Solheim was sailing in the south of Crete in the service of the Allied forces, as part of convoy AS 21 together with the ships Brattdal, Thelma and Thermoplyæ that were heading to Alexandria. The ships were accompanied by three destroyers, one of which was the Royal Hellenic Navy’s ship King George.

During the evening of that day and at approximately 18:45 hrs., the convoy was attacked by 15 German aircraft which bombed the convoy. Although no direct hits were observed,  many bombs fell really close to the ships.

One of these bombs fell  just a few meters off the ship (see photo below) and damaged it. An engineer, Knut Johan Mikkelsen, was killed (reported missing).

According to German sources, the aircraft that carried out the attack were Junkers 88 of the II.LG1 squadron of the Luftwaffe based in Sicily. (SOURCE: Junkers Ju 88 Kampfgeschwader in North Africa and the Mediterranean by John Weal p. 17)

The ship was attacked again, and as a result, the crew boarded King George, who transported them to Souda.

A tug was ordered to go to the spot where the attack took place and at the location of 34 30N 24 10E, almost 20 miles south of Crete and Gavdos islands .

However, the ship sank either the same night or the next morning, as the Germans claim that they returned and sank the ship.

Consequently, the tug that arrived at the spot found only debris floating around, but no sign of the ship itself.

Although the photo I quote can not in itself be a presumption of the fact of the bombing of this particular ship since there is no reference point such as a shore or some other evidence to prove which ship it is, I believe that the photo was taken during this specific attack.

The ship affected is similar to the Solheim which was a very large and modern tanker for the time.

Besides, the tankers that were bombed during the German invasion of the Greek seas were not many, and the big ones even fewer….

The photo was auctioned on the internet along with the rest I post.