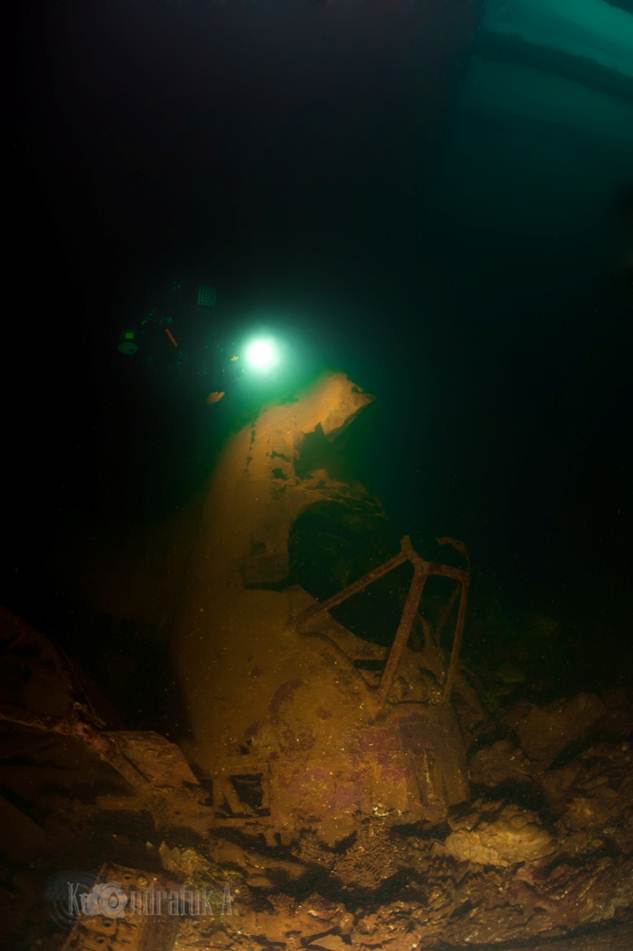 Truk Lagoon is considered as the “Holy Grail” of wreck diving worldwide, due to the wide variety of wrecks, many of them in nearly intact condition.
PHOTO CREDITS: ALEKSEI KONDRATUK
Aleksei Kondratuk, a scuba diver and underwater photographer from Vladivostok, Russia, shares his stunning photos from the destroyed fleet of the Japanese, that remind us of the fierce battles that took place at this remote area of the Pacific Ocean back in 1944.
During WW2 Truk Lagoon provided Japan an excellent harbor that could accommodate the Imperial fleet.
The military facilities in the area included five airstrips, a seaplane base, a torpedo boat station, a radar station,  a submarine repair station, and a communication center.
Thousands of troops and a wide variety of heavy guns well hidden in caves, secured that the lagoon remained an impenetrable fortress.
The “Gibraltar of the Pacific“ was a threat to any Allied operation in the Pacific.
And so it was the mission of the U.S. Navy Force 58 to neutralise this threat.
«Operation Hailstone», the code  name for the assault on Truk Lagoon, culminated on February 17th and 18th, 1944.
The American armada included 5 Fleet Carriers and 4 Light Carriers.
Supporting the carriers were a fleet of 7 battleships, cruisers, destroyers, submarines, a variety of support ships, and more than 500 aircraft.
Japanese losses resulting from the U.S. Navy attack totaled over 250 aircraft and 45 ships.
Among the ships sunk were cruisers, destroyers, sub-chasers, tankers, and cargo carrying supply ships.
Divers from all over the world visit Truk Lagoon to see one of the best preserved underwater museums of WW2.