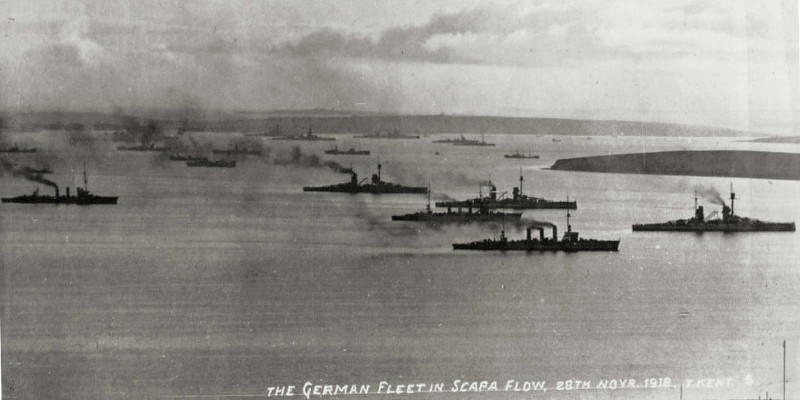 Divers from around the world visit Scapa Flow to explore the WW1 wrecks and to discover European history resting on the seabed of Scotland.

Armistice and internment of the German fleet

Scapa Flow is a natural bay, sheltered from the wind, located in the Orkney Islands. This port was used as naval base for the Royal Navy during both world wars.

In November 1918, a few days after the Armistice, Germany is forced to surrender  all warships. A fleet of 74 battleships of the German Imperial Fleet arrive at Scapa Flow accompanied by over 250 other ships.

Scuttling of the German fleet in Scapa Flow

Under the terms of the Versailles Treaty, all German ships have to be handed over to the allies. In June 1919, Vice Admiral Ludwig von Reuter decided to scuttle the fleet, in order to avoid the enemies of WW1, i.e. mainly the British and the French, to take hold of the fleet. Almost all of the 74 German ships were deliberately sunk within hours.

The strategic importance of Scapa Flow for the Royal Navy made it imperative to remove the wrecks that posed an immediate threat to navigation.

The company Cox and Danks bought the rights to exploit the wrecks and began the salvage operation. Innovative processes, despite repeated failures, allowed the company to salvage 32 ships.

Another company takes over in 1936 and many other ships are slowly salvaged. However, 7 vessels between 150 and 180 meters in length, the König, the Markgraf, the Kronprinz Wilhelm, the Brummer, the Köln, the Karlsruhe and the Dresden, are still resting on the seabed, making Scapa Flow their graveyard for eternity.

One more battleship joined the WW1 German warships in the dark seabed of Scotland, but this time it was the turn of the Royal Navy to pay a heavy price: The HMS Royal Oak is sunk by the German U-Boat U-47, commanded by Korvettenkapitän Günther Prien in October 1939, in a daring operation, which cost the lives of 834 British sailors.

U-47 approached Scapa Flow through the narrow approaches at Kirk Sound with surprising ease. It was high tide and a little after midnight on 14 October 1939.

U-47 first sailed towards Lyness but, finding no ships in the area and encountering no resistance, then turned to the north where HMS Royal Oak, HMS Pegasus and possibly HMS Iron Duke were spotted (Wood, 2008, p.92).

When the first torpedo struck HMS Royal Oak at 12.58am, the dull thud confused the sailors – they thought the muffled explosions were an on-board problem, perhaps an explosion in the paint store. They certainly did not think it was a U-boat attack.

A second salvo failed to deliver a hit but the confusion surrounding the first hit gave Commander Prien an additional 20 minutes to return to his firing position, reload, and fire a third salvo. This third discharge landed direct hits amidships.

Such was the ferocity of the explosions, the ship heeled over alarmingly and all the lights went out. It had been fine weather so all of the ship’s hatches were open.

Undoubtedly Royal Oak would have taken longer to sink and more lives would have been saved if the watertight hatches had been closed; but it is not normal procedure to have all hatches closed when in a supposedly safe harbour with no alerts.

When the ship rolled its gun barrels shifted, pulling the ship faster beneath the surface. Water crashed through the open hatches and men asleep in their bunks were unable to get out in time. It took just minutes for the battleship to sink.

Hundreds fought for their lives in the water, trying to swim for shore through thick fuel oil and in freezing temperatures. A total of 834 men lost their lives. Many of the men are buried in the Lyness Royal Naval Cemetery on Hoy (Wood, 2008, p.92).