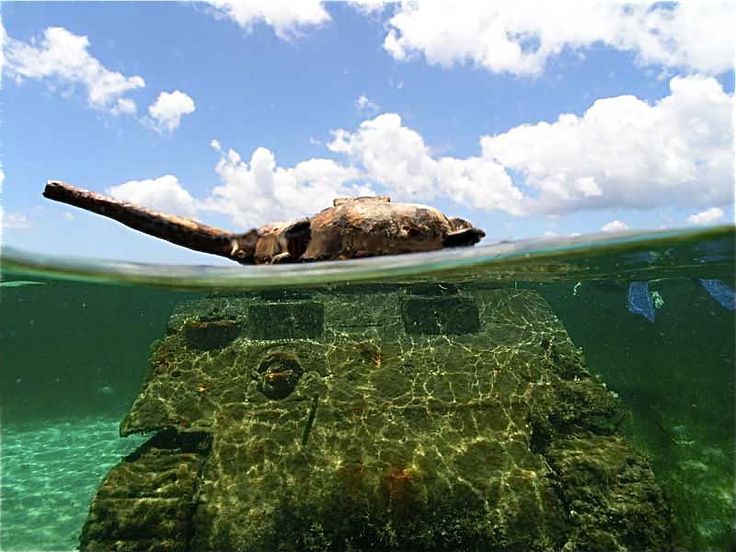 The Battle of Saipan was a battle of the Pacific campaign of World War II, fought on the island of Saipan in the Mariana Islands from 15 June 1944 to 9 July 1944. 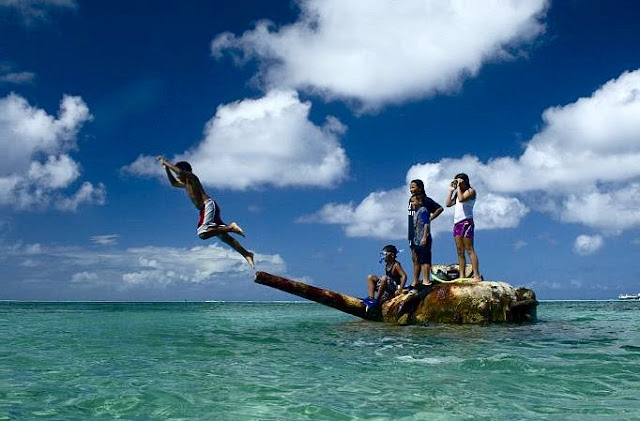 The invasion fleet embarking the expeditionary forces left Pearl Harbor on June 5, 1944, the same day Operation Overlord was launched with the invasion of Normandy (AKA the D-Day landings). The Normandy landings were the larger amphibious landing, but the Marianas invasion fielded the larger fleet. 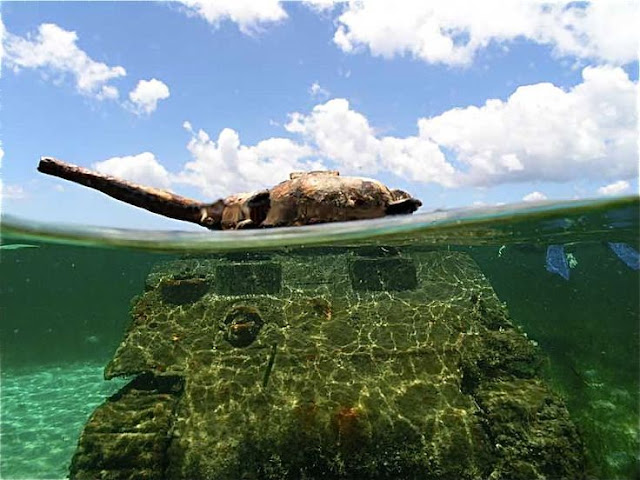 By July 7, the Japanese had nowhere to retreat. Saito made plans for a final suicidal banzai charge. On the fate of the remaining civilians on the island, Saito said, “There is no longer any distinction between civilians and troops. It would be better for them to join in the attack with bamboo spears than be captured.” At dawn, with a group of a dozen men carrying a great red flag in the lead, the remaining able-bodied troops, about 3,000 men, charged forward in the final attack. Amazingly, behind them came the wounded, with bandaged heads, crutches, and barely armed. 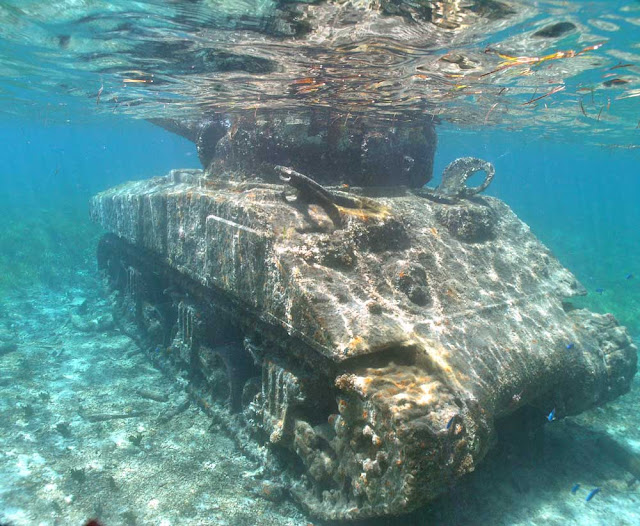 The Japanese surged over the American front lines, engaging both Army and Marine units. The 1st and 2nd Battalions of the 105th U.S. Infantry were almost destroyed, losing 650 killed and wounded.
However, the fierce resistance of these two battalions, as well as that of Headquarters Company, 105th Infantry, and elements of 3rd Battalion, 10th Marines (an artillery unit) resulted in over 4,300 Japanese killed.
For their actions during the 15-hour Japanese attack, three men of the 105th Infantry were awarded the Medal of Honor – all posthumously. Numerous others fought the Japanese until they were overwhelmed by the largest Japanese Banzai attack in the Pacific War . 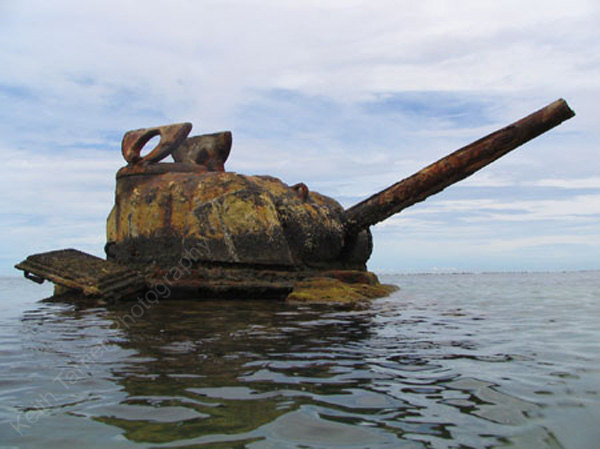 Many hundreds of Japanese civilians committed suicide in the last days of the battle, some jumping from “Suicide Cliff” and “Banzai Cliff”. Efforts by U.S. troops to persuade them to surrender instead were mostly futile.
Widespread propaganda in Japan portraying Americans and British as “devils” who would treat POWs barbarically, deterred surrender (see Japanese Military Propaganda (WWII)).
In the end, about 22,000 Japanese civilians died. Almost the entire garrison of troops on the island — at least 30,000 — died.
For the Americans, the victory was the most costly to date in the Pacific War. 2,949 Americans were killed and 10,364 wounded, out of 71,000 who landed. 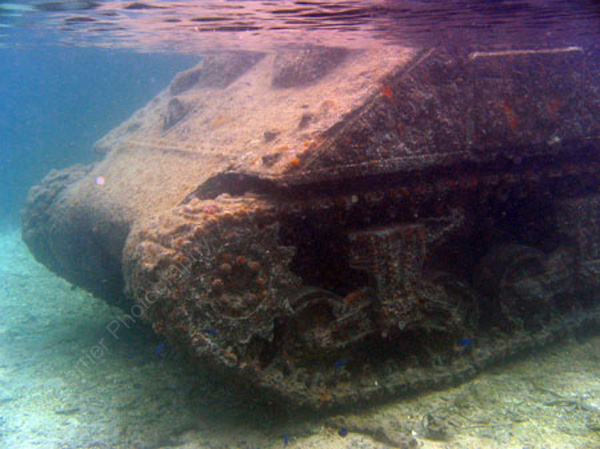 The Tank was probably off-loaded from an Landing Ship, Tank or LST (not so jokingly referred to as Large Slow Targets). It is also possible that the LST was disabled by Japanese shelling.
The tank crew may have tried to make a mad dash to the beach but it was just too far away. The water was shallow enough that the crew probably escaped without drowning, but, the withering rain of bullets, artillery and mortar fire may have killed them. 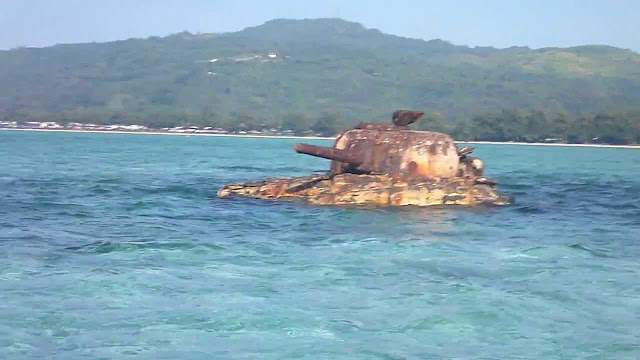 This tank was about 300 meters off the beach. There were 3 but not really close to each other and this one is turned and looks to be engaged with a pillbox on the shore and has a nasty antitank round below the water line on the starboard side right behind the driver/front gunner.
Being the typical tourists we couldn’t resist swimming out and getting close to it and checking it out. I will see if I can find the interior shots of it. What was really neat is the barrell is actually pointing at a bunker/pillbox that had taken a shot and collapsed. 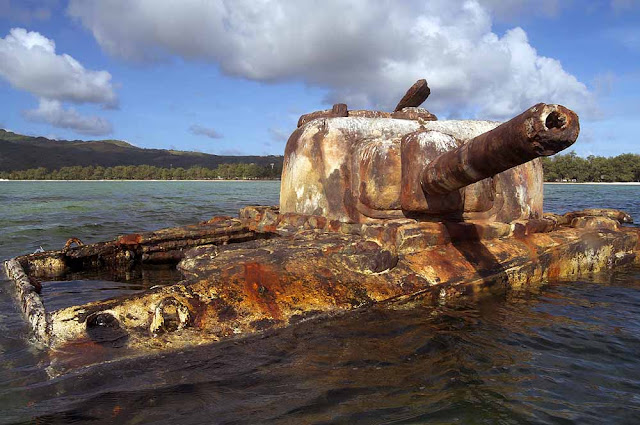 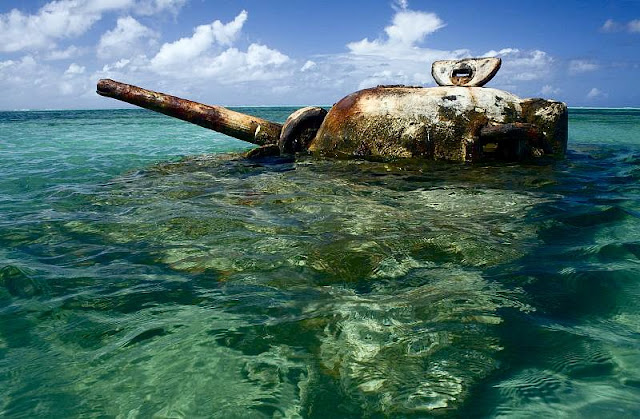 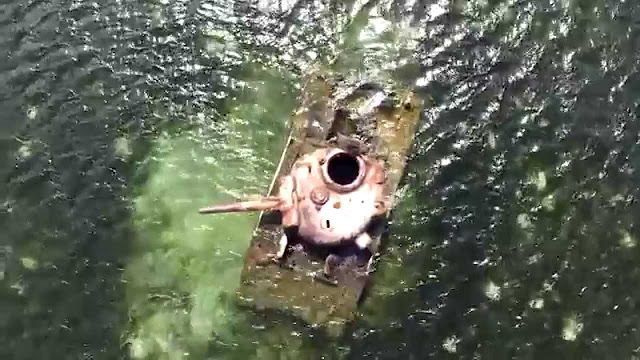 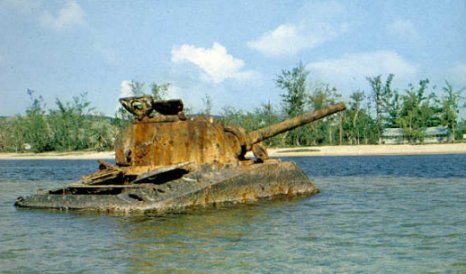