By Pierre Kosmidis Photos submitted by Peter Graham @Berlin Battle Damage and used by permission Berlin is nowadays a vibrant and colourful city, following its unification after the fall of the iron curtain. Today, people from different nationalities walk on the very same streets that over 70 years ago were the stage of the final battles […]

By Pierre Kosmidis THEN AND NOW: Bombing of Kalamaki Airfield (also known as Hassani or Ellinikon), Athens, Greece, seen from the bomb bay of a US B-17 bomber, 15 Sep 1944 and a current image via google maps (source of photos: ww2db/google) The airport was built in 1938, and after the German invasion of Greece in […]

By Pierre Kosmidis Photos submitted by Andreas Sfakianakis and used by permission Respected researcher Andreas Sfakianakis from Crete, is considered to be among the best in identifying landscapes from WW2 photos and has once again provided www.ww2wrecks.com with a wonderful series of “Then & Now” pictures, that demonstrate how little, or how much in certain cases, […]

By Pierre Kosmidis Research and photos: Andreas Sfakianakis Mr. Andreas Sfakianakis, a researcher from Crete, has identified the exact locations of photos shot in 1941, which are the property of the Australian War Memorial. In these photos, which date back to April 1941, the Allied Forces are expecting the German onslaught, which took place roughly a […]

By Pierre Kosmidis The city of Nafpaktos, or Lepanto, is widely known for the naval battle that took place o n October 7,1571, in which the Christian states of Europe defeated the Ottoman fleet. Miguel de Cervantes, the world famous Spanish author, was wounded during this naval encounter. On April 26, 1941 the German invasion […] 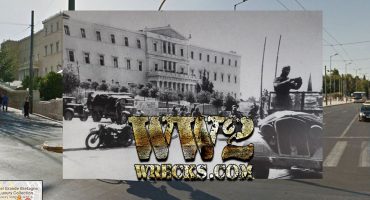 By Pierre Kosmidis With the conclusion of Operation Marita, the conquest of mainland Greece and a couple of weeks before Operation Merkur, the airborne invasion of the island of Crete, the Germans held a victory parade in Athens, on May 5, 1941. The Royal Palace in 1941, which is the Greek Parliament today, was a […]