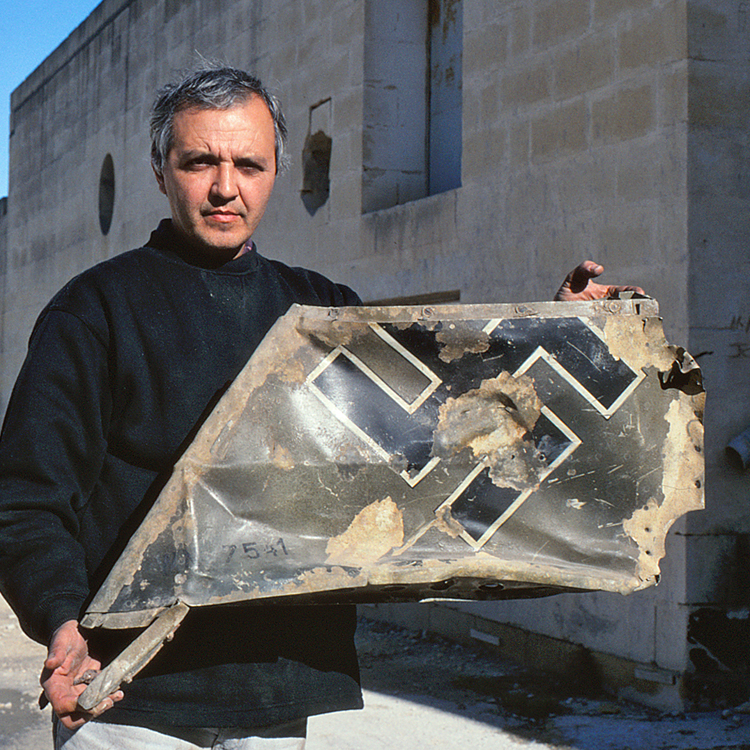 Acclaimed author  Anthony Rogers painstakingly researched all WW2 aircraft crash sites in Malta and wrote a detailed account of the circumstances of their loss, as well as the fate of their crews.

The Siege of Malta was a military campaign in the Mediterranean Theatre of the Second World War.

From 1940–42, the fight for the control of the strategically important island of Malta pitted the air forces and navies of Italy and Germany against the Royal Air Force and the Royal Navy.

The opening of a new front in North Africa in mid-1940 increased Malta’s already considerable value. British air and sea forces based on the island could attack Axis ships transporting vital supplies and reinforcements from Europe.

General Erwin Rommel, in de facto field command of Axis forces in North Africa, recognised its importance quickly. In May 1941, he warned that “Without Malta the Axis will end by losing control of North Africa”.

The Axis resolved to bomb or starve Malta into submission, by attacking its ports, towns, cities, and Allied shipping supplying the island. Malta was one of the most intensively bombed areas during the war.

The Luftwaffe (German Air Force) and the Regia Aeronautica (Italian Royal Air Force) flew a total of 3,000 bombing raids over a period of two years in an effort to destroy RAF defences and the ports.

Success would have made possible a combined German–Italian amphibious landing (Operation Herkules) supported by German airborne forces (Fallschirmjäger). It was never carried out. In the event, Allied convoys were able to supply and reinforce Malta, while the RAF defended its airspace, though at great cost in material and lives.

By November 1942, the Axis had lost the Second Battle of El Alamein and the Allies had landed forces in Vichy French Morocco and Algeria under Operation Torch. The Axis diverted their forces to the Battle of Tunisia, and attacks on Malta were rapidly reduced. The siege effectively ended in November 1942.

In December 1942, air and sea forces operating from Malta went over to the offensive. By May 1943, they had sunk 230 Axis ships in 164 days, the highest Allied sinking rate of the war. The Allied victory played a major role in the eventual Allied success in North Africa.

Author Anthony Rogers speaks to www.ww2wrecks.com about his book Air Battle of Malta

“My mother came from Malta. It is also where I grew up. Later I served there in the Royal Marines.

I enjoy history generally and find Malta’s past particularly interesting, not least the island’s role during the Second World War.

Much has been written about the latter period. I wanted to create something different, to present a vivid retelling of events, focusing on the loss of British, Italian and German aircraft and what became of their pilots or crews.

At the same time it was my intention to provide a detailed record that will continue to be valued by future generations.

The result is Air Battle of Malta.

Many were lost offshore or were written off while landing at airfields on Malta and Sicily.

The remainder fell on or near the Maltese Islands.

Of the latter, nearly 200 crash sites were relocated and identified.

The circumstances of each of those crashes are described in my book, which draws on eyewitness accounts and primary sources from both sides.”