Designed in 1939, the Curtiss SB2C ‘Helldiver’ was a dive-bomber intended as the replacement for the earlier Douglas-built SBD ‘Dauntless’.

When the Dauntless went into production in 1938, the U.S. Navy already knew that the speed, range, and payload of the Dauntless could be improved upon. The first Helldiver flew on December 18, 1940, but SB2C’s would not reach fleet service in significant numbers until mid-1944.

SB2C stands for ‘Scout, Bomber, second dive bomber contract from Curtiss’, and the ‘C’ was the letter assigned by the US Navy to all aircraft built by the Curtiss Aircraft Corporation.

The Helldiver carried a crew of two- a pilot, and a rear-gunner who doubled as the radioman. Early versions of the Helldiver were armed with a single machine gun in each wing, while later versions carried a 20mm cannon in each wing instead of machine guns. The aircraft had an internal bomb bay and could carry a variety of bombs as well as depth charges.

The Helldiver is one example of a plane that got off to a rough start, and that’s putting it mildly. Early versions of the Helldiver were prone to structural failures, and one example was a habit of the tail breaking off during a hard landing. In a derogatory play on the SB2C designation, the Helldiver was at times referred to as the ‘Son of a Bitch, 2nd Class,’. Another common nickname was “The Big-Tailed Beast”, often shortened to simply “The Beast.”

The skipper of the second USS Yorktown, “Jocko” Clarke, refused to take Helldivers into combat in late 1943, and went instead with the older SBD’s.

But Curtiss and the U.S. Navy continued to work on improvements to the plane. In early 1944 only one aircraft carrier had Helldivers on board. By the middle of 1944, improved versions of the plane were rapidly equipping the dive-bomber squadrons on U.S. Navy aircraft carriers, replacing the SBD Dauntless as the primary carrier-based dive bomber.

One of the complaints that would follow the Helldiver throughout its career was the amount of maintenance needed to keep the plane flying. But it could carry a much bigger punch than the older SBD.

In spite of its flaws, the Helldiver was ultimately a war winner.

The first Helldiver squadron to see action at Kwajalein Atoll was Bombing Squadron 17 (VB-17), flying from the USS Bunker Hill (CV-17) during Operation Flintlock at the end of January 1944. They flew strikes against targets on Kwajalein Island, as well as several nearby islands on the east and west reefs.

Following Operation Flintlock, and until the end of the war, several U.S. Navy and Marine units operated Helldivers from both Roi Island and Kwajalein Island.

The ‘aircraft graveyard’ near Mellu Island contains the wreck of at least one Helldiver, and also a separate Helldiver wing. The wing section lies in shallow water on the slope of the reef, and it points at the intact Helldiver wreck further out into the lagoon- you can simply take a compass azimuth along the length of the wing and follow that heading out to where the intact Helldiver lies. 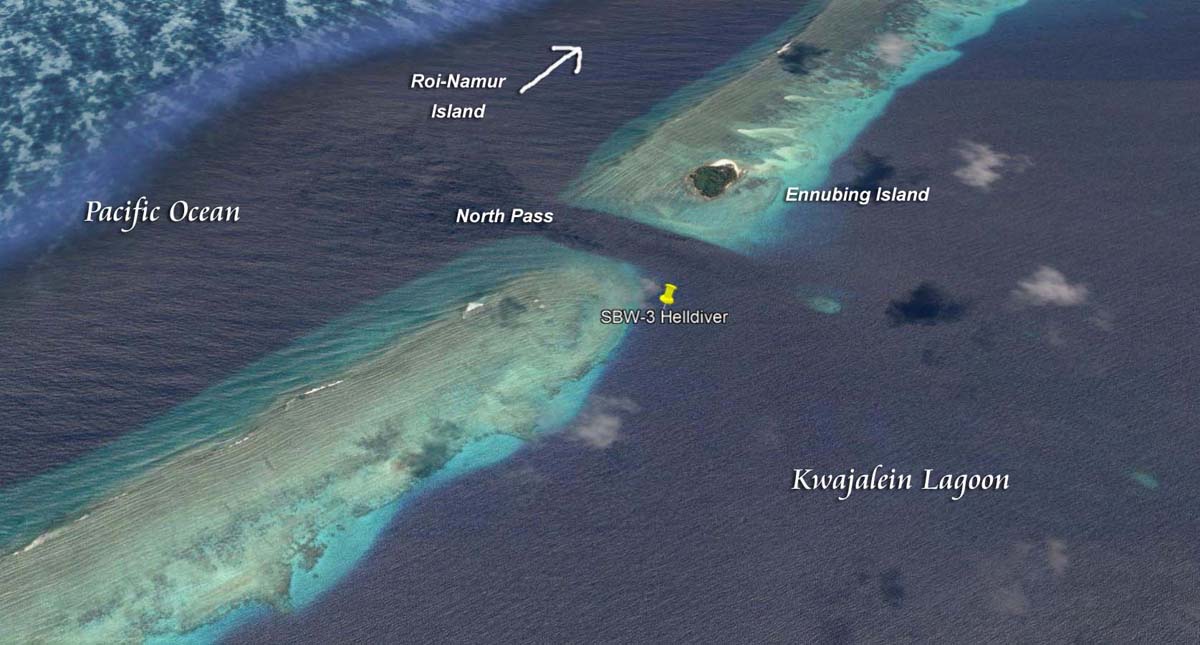 My research leads me to believe that the intact Helldiver is an SBW-3, BuNo 21461, built by the Canadian Car and Foundry company. The plane belonged to VS-66, and it was damaged during a strike against Japanese positions at Wotje Atoll, when it struck a coconut tree while pulling up from a strafing run.

The plane nearly crashed, but the pilot managed to regain control and limp it back to base at Roi Island.

After an inspection of the damage, it was decided that the plane was damaged beyond repair, and it was stricken in June 1945 and dumped into the lagoon.

The Helldiver lies in 90 feet of water. Parts of the tail lie nearby. The pilot’s windscreen and sliding sections of the canopy are missing, as are the dive flaps.

Shell casings, exhaust manifold parts, and other debris is lying in the pilot’s cockpit and on the left wing, and a large metal box is under the right wing.

I’ve done several dives on this wreck, the first of which was on June 12, 2008. At that time, the right wing was in the folded position.

The next time I dived this wreck was on July 30, 2011, and I saw that the right wing was unfolded.

How did that happen? My theory is that a dive boat probably tried to anchor on the wreck, hooked the right wing with an anchor, and pulled it over into the unfolded position it is in now.

Regardless, this wreck makes for a great dive, and well worth visiting multiple times.

The Helldiver was the last operational dive bomber placed in service with the U.S. Navy. Following World War II, the Helldiver remained in U.S. service for another five years, with the last ones being phased out of Navy Reserve squadrons by 1950.

Surplus aircraft were sold to the naval air forces of France, Italy, Greece, Portugal, and Thailand.

Helldivers saw limited service with the Royal Australian Air Force and the British Royal Navy Fleet Air Arm during the war, although neither service used the Helldiver in combat, citing “appalling handling characteristics”. Most of the Helldivers ordered by Australia and Britain were cancelled after only a few were delivered.

Today, several Helldivers remain in museums around the world. Only one example has been restored to flying condition, and it is owned and operated by the Commemorative Air Force in Graham, Texas.

Along with the examples in museums, it helps preserve the memory of the crews who flew and maintained the plane during and after World War II.