On a hot midsummer afternoon, on July 24, 1985, the tourists and crew on board a ferry named “Naias II” witnessed a rather unusual sight: A twin engine aircraft ditched at sea, not far from the ferry boat and stayed afloat for a few minutes, before disappearing under the waves.

The three aircrew were quickly taken on board by the ship’s crew and disembarked safely at the port of Piraeus. They were soon taken to the US Embassy, as they were US citizens and since then information on the incident has been scarce.

It has been claimed that this specific aircraft was on its way to Israel, having departed from Germany and with transit stops in Italy and Greece was on its final leg of the journey.

It appears that fish trawlers dragged the aircraft wreck to its current position, as it resides upside down on a shallow area no more than 6 metres deep.

The US Army procured the first three King Air 200s, designated the RU-21J, in 1971. The U-21 Ute military version of the Beechcraft King Air A90 aircraft was deployed in a variety of configurations, including the U-21A/D/G, U-21F, and U-21J. The U-21 is an eight-place, fixed-wing aircraft used for troop and command transport, medevac, reconnaissance, and cargo. 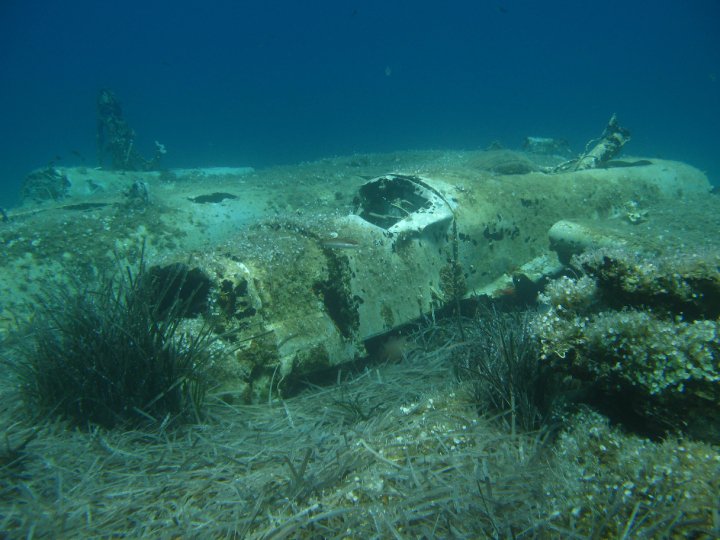 The U-21 Ute twin turbine, propeller driven utility aircraft has a normal cruise speed of 210 knots and an endurance of over 5 hours flying time.

This low-wing utility aircraft has reversing propellers and retractable tricycle landing gear. The U-21 Ute is not normally employed as evacuation aircraft. In emergency situations, both of these aircraft can be configured to evacuate litter and ambulatorypatients. It is capable of accommodating ten ambulatory patients, or three litter patients plus three ambulatory patients and a medic.

The success which the skytroopers of the 1st Cavalry Division had with airborne radio relay in the famous Ia Drang valley campaign in 1965 paved the way for extending a commander’s ability to control the action on the battlefield.

Recalling the previous success of the 1st Cavalry Division, communications electronics planners of the U.S. Army, Vietnam, opted for an airborne radio relay system that would connect the field commander’s combat voice radios with his higher headquarters.

The 1st Signal Brigade received nine twin-engine U-21, or “Ute,” aircraft in the fall of 1969. Each was equipped with a radio console capable of relaying three voice radio nets.

But the most significant fact was that all three nets could now operate and be relayed in the secure voice mode. The first missions involving this new relay system proved that a secure voice radio link of 140 nautical miles could be readily established at an altitude of only 3,500 feet.

Since the Army’s U-21 plane can stay aloft on station for several hours at a much higher altitude, the occasions when a small unit or long-range patrol was without communications were virtually nonexistent.

The final contingent of 15th Military Intelligence Battalion aircraft (one U-21A and two RV-1Ds) arrived in Saudi Arabia on 27 October 1990.

A contract exchanged 124 obsolete, and non-pressurized U-21U aircraft and a warehouse full of spare parts for a brand new B1900D C-12 aircraft. The exchange is valued at $6.1 million and avoids $5 million in cost associated with storage and disposal of the U-21s and its parts.

The Operation Support Airlift (OSA) Command was created in FY 92 and combined Active and Reserve Component OSA operations, began the retirement of non-standard aircraft (T-42, U-8, U-21), and started the modernization of the remaining fleet of C-12, C-20, C-21 and C-26 airplanes.

In June 1993 the Chief of Staff Army gave the continental United States (CONUS) OSA mission to the ARNG.

The Army aviation’s overall goal relative to the fixed wing fleet is to reduce the current number of models from 21 to 4, including procurement of a new C-XX Short Range (SR) to perform missions currently performed by U-21, et al.