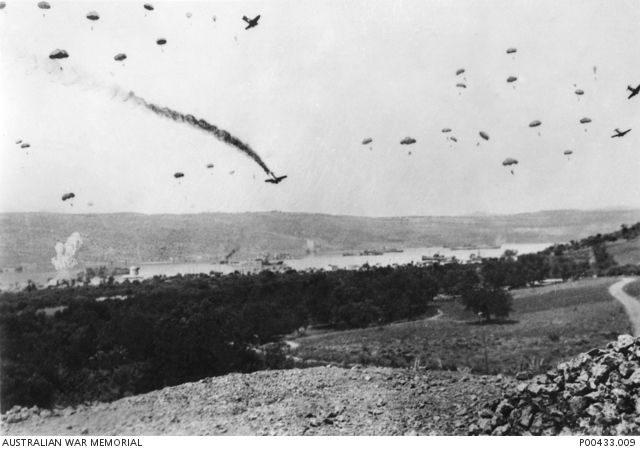 One of the most known, widely circulated and popular photos related to the Battle of Crete in May 1941, depicts a Ju52 Luftwaffe transport aircraft going down in flames, trailing thick black smoke behind it, while German paratroopers are seen to jump hastily out of it.

According to the official Australian War Memorial website caption “German parachute troops of the XI Air Corps, over Suda Bay during the airborne attack on Crete, May 1941. One of the glider planes is on fire and about to crash, while another has part of its fuselage shot away. Heavy casualties were inflicted on the paratroopers.”

There are quite a few inaccuracies in the photo caption, as these aircraft are not “gliders”, but Ju52 transport aircraft. German paratroopers were not deployed over Suda bay at all. The only actual fact is that indeed the Allies and the Greeks inflicted such heavy casualties on the German airborne troops, that following the Battle of Crete, the Germans abandoned any thoughts of large-scale paratroop operations in the future.

Now, let’s focus on this photo, which is actually a compilation of at least three separate images:

One image was shot during the actual aerial bombardment of Suda bay, as we can see a bomb exploding on the left side of the photo.

One image is the actual shooting down of a Ju52, possibly over Herakleion city in Crete, approximately 100 kilometres (60 miles) from Suda bay.

One (or more images) are of paratrooper sticks hovering over their landing spots.

Let’s suppose for a moment that indeed paratroopers were deployed over Suda bay: This means that most of them would have drowned, as they would eventually end up in the sea, rather than on the ground.

With this analysis, by no means do I want to minimise the heroic, yet futile in the end, struggle of the Allies and Greeks. The Germans did indeed suffer heavy casualties before finally achieving a Pyrrhic victory, their plans to use paratroopers in large-scale ops after Crete (possibly in Malta or Cyprus) were abandoned.

The propaganda war was fought by both sides and this image is a testament to the ferocity of the Battle of Crete, even it is not actually a “true” image.