WW2 Aviation enthusiasts in Greece, members of  www.aviationarchaeology.gr have initiated a search for the Spitfire wrecks lost between April 4th to August 7th, 1945.
Those three Supermarine Spitfires crashed in the area of Vari (see map below) and belonged to the 335 and 336 Fighter Squadrons of the Royal Hellenic Air Force (RHAF).
According to official reports, two of them crashed at sea, while the details for the third aircraft do not specify the exact crash site. 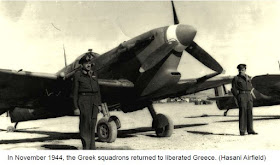 The researchers were motivated from the reports presented in “Supermarine Spitfire losses in Greece 1942-1953”, edited by respected researcher Manolis Bardanis and the official website of  the Hellenic Air Force.

Nikos Karatzas, team leader of the project, said to WW2 Wrecks in Greece:
“The detection of aircraft wreckage at sea is difficult and this is mainly due to the size of the Spitfire, as well as because of the absence of information or indications on the exact crash sites.
The depth at the areas we are conducting our research ranges from 20 to 65 meters.” 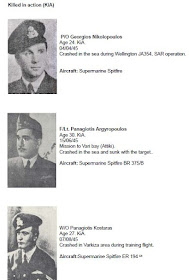 No 335 (Greek) Squadron
Formed on 10 October 1941 at Aqir airfield in Palestine.
Initially it was equipped with Hurricane Mk I aircraft.
The squadron began operations over the Western Desert, where it operated continuously until late 1942, participating in convoy protection,
bomber escort and ground attack roles.
It remained there on offensive operations until after the Battle of El Alamein when it moved into shipping protection duties along the Libyan coast.
In January 1944 it was re-equipped with the newer Spitfire Mk Vb and Vc aircraft.
In September 335 Squadron moved to Italy, where it conducted operations over Albania and Yugoslavia.
In November the squadron returned to its homeland, from where it attacked German forces in the Greek islands of the Aegean and Crete.
On 15 September, the squadron was moved along with its sister unit to the Italian theatre, from where it carried out operations primarily over occupied Yugoslavia.
The letter codes allocated to this squadron were the FG – possibly meaning “Free Greeks”.
No 336 (Greek) Squadron
The second Greek squadron was formed in the Western Desert on 25 February 1943.
From then until February 1944 the squadron was involved in shipping protection and air defense
duties along the Libyan coast.
Together with 335 sq., both units moved to Italy in September 1944, from where they operated over Albania and Yugoslavia.
In November 1944, 336 returned to its homeland and carried out attacks against German forces in the  Greek islands of the Aegean and Crete.
The squadron moved to Thessaloniki in May 1945.