Photos: Kostas Mylonakis
www.wetklik.gr
An important historical discovery, the first Italian aircraft of World War II which was located in Greece was documented photographically by the diving team of Anthony Grafas. 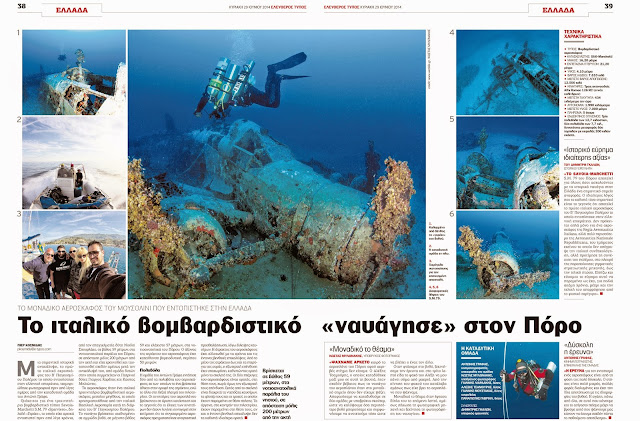 It is a three-engined bomber Savoia – Marchetti SM 79 ‘Sparviero “, (“Hawk”), which was originally identified a few years ago, by the professional diver Noulis Spourlakos at a depth of 59 meters, at the southeast coast of Poros, just 200 meters from the shore and was researched and identified almost immediately upon discovery, by divers George Karelas and Kostas Milionis. 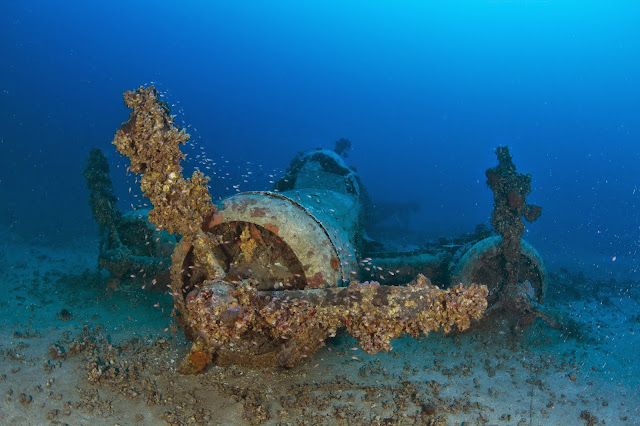 The aircraft was an Italian bomber, which was used by the Italian Royal Air Force during World War II. The wreck is sitting on a sandy seabed at a maximum depth of 59 and a minimum of 57 meters, at the southeast of Poros.

According to the researches made by Ferdinando D’Amico for the UFR Team, the Greek group of professional sea divers who found the plane, the plane should/could be the MM. 22293 coded “B2-09” of the ANR Torpedo-bomber unit, lost in the night of 4/5 August 1944.

On that night, eight S.79s of “Gruppo Buscaglia” took off from Eleusis airfield for a mission against an Allied convoy of 30 merchant ships escorted by 4 warships NW of Tolemaide (today Ad Dirsyah, Libya).

Due to the bad weather, only three S.79s found and attacked the convoy, claiming three hits on the merchant ship “Samsylarna” which sunk. They were the S.79s of Ten. Merani, Ten. Morselli and Ten. De Lieto.

According to the unit’s Diary “…five aircraft made it back safely to Eleusis airfield, with one damaged due to the left undercarriage not extending correctly. One S.79 landed in Crete, one resulted missing off Crete. The last S.79 ditched due to lack of fuel near Argos; the crew was unhurt and was safely rescued…”

The members of the crew on board of MM. 22293 on that mission were : Pilot – Ten. Marcello Perina; 2nd Pilot – Ten. Gianfranco Neri; Engineer – 1° Av. Mot. Marcello Manfrino; Wireless – Serg. Marc. Giuseppe Apolloni; Armourer – Av. A. U. Arm. Franco Zanchi. All escaped unhurt from the ditching. 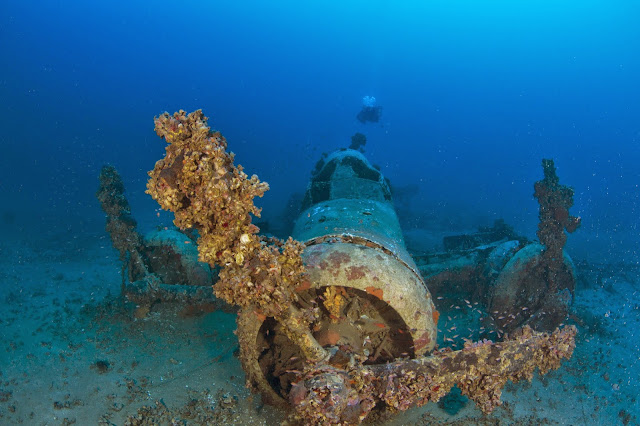 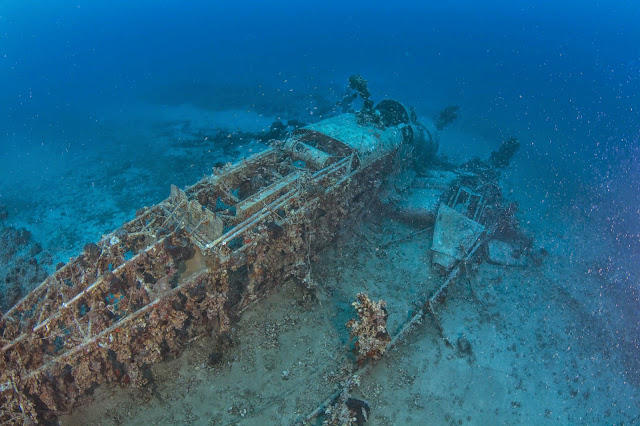 The fuselage of the aircraft has been altered over the years and the strong benthic coatings.
The two wings of the aircraft are visible in their place. In addition to the frame we can see the fuel tanks and the wheels which have been kept in a flight position.
The instruments, the display panel of the cockpit, have remained in place, though the intense benthic coating does not make them highly visible.
Technical characteristics of the aircraft:
Type: Bomber aircraft
Manufacturer: SIAI – Marchetti
Length: 16.20 meters
Wingspan: 21.20 meters
Height: 4.10 meters
Weight (empty): 7.610 kg
Maximum takeoff weight: 12,500 kg
Engines: Three radial AlfaRomeo 126 RC (nine cylinders)
Maximum speed: 434 km per hour
Autonomy: 1990 km
Maximum height: 7,000 meters
Crew: 5 persons
Indicative armament: Three machine guns of 12.7 mm, two machine guns of 7.7 mm., Two torpedoes with 200kg warheads each.
Dimitris Galon, Historical Researcher
“The Savoia – Marchetti SM 79 is for all those involved with historic shipwrecks in Greece, a major benchmark.
The particular reason that makes it so important is the fact that it is the first Italian aircraft of World War II which was located in the Greek territory.
I hope and pray this finding remain so for many more years, until the final absorption of the natural environment. “
The diving team
Divers
Anthony Grafas, filmmaker, team leader
Costas Mylonakis underwater photographer
John Liardakis diver
Alexis Tsamouris diver
John Moustakas, diver
Panagiotis Gavriil, diver
Affiliates
Dimitris Galon, historical researcher
Costas Mylonakis, underwater photographer
“Alexis Tsamouris, who dived with me on this dive, was almost certainly the sinking of the plane was the only place we had been looking for.
We decided to dive into two groups with underwater scooters in order to cover as most bottom area as we could and agreed to open just enough to look each other. When we got to the bottom and start researching in the third minute I saw the torch of Alexis to wave from afar.
On the motion of the lens I immediately understood that he had found the plane . Unique feelings when I arrived next to him in the next minute, I immediately lifted the camera and started photographing the wreck. “
Anthony Grafas, filmmaker, team leader

“The research to identify an aircraft is inherently very difficult. The target is very small, many times disintegrated.”