Photo and documentation by Dan Reeder

The Battle of Peleliu, codenamed Operation Stalemate II was fought between the U.S. and Japan during the Mariana and Palau Campaign of World War II, from September to November 1944, on the island of Peleliu.

U.S. Marines of the 1st Marine Division, and later soldiers of the U.S. Army’s 81st Infantry Division, fought to capture an airstrip on the small coral island of Peleliu. This battle was part of a larger offensive campaign known as Operation Forager, which ran from June to November 1944, in the Pacific Theater.

Major General William Rupertus, Commander of the 1st Marine Division, predicted the island would be secured within four days.

The heavily outnumbered Japanese defenders put up such stiff resistance, often fighting to the death in the Emperor’s name, that the island became known in Japanese as the “Emperor’s Island.”

The battle was controversial in the United States due to the island’s lack of strategic value and the high casualty rate.

The defenders lacked the means to interfere with potential US operations in the Philippines and the airfield captured on Peleliu never played a key role in subsequent operations.
The high casualty rate exceeded all other amphibious operations during the Pacific War.
The US forces suffered 10,786 casualties (2,336 killed and 8,450 wounded) and the Japanese forces sustained 10,897 casualties (10,695 killed and 202 captured,183 foreign laborers, 19 Japanese soldiers).

The National Museum of the Marine Corps called it “the bitterest battle of the war for the Marines”.
Dan Reeder started going to Palau in 2002.
Here is Dan Reeder’s account in his own words:
In 2004, we dove out off of Peleliu and took the short tour of Peleliu by Tangie.
Tangie took me out to the beach and told me:
“This is where the Marines came to shore”.
I knew nothing about Peleliu, in fact had never heard of it.
I really did not think of anything of it.
Tangie opened a folder and showed me a picture of the beach, where I was standing,  and it was covered by dead Marines.
My heart sunk.
I started reading books about the battle and became more intrigued. 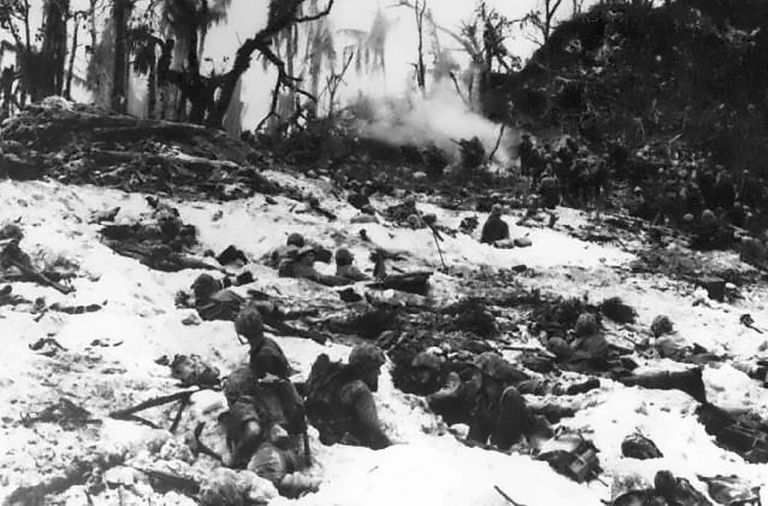 I retired from The Anchorage Police Department in 2015 and moved to Palau.
Really for the diving but I became more interested in the Battle of Peleliu.
I gave up the diving and rented a house on Peleliu.
I started reading every book I could find about it.
I would go back and forth to Manila and a friend took me to the Manila American Cemetery.

I then realized a year or two later that many that died were buried in the cemetery.
I would research where the soldiers were killed.
I would carry flags with me on Peleliu and then take them to Manila and place them on the graves of the fallen.

I contacted several family members and sent them a photo as well as the flag.
I was blessed to meet the guys from Bent prop and heard their stories.
It really breaks my heart what this young men endured on Peleliu as well as WWII.
I have tried to run down many family members using   http://brothersinbattle.net/index.html site.

But Sue, who started it, said most the email addresses are 20+ years old and no longer active.
She is getting to where she can no longer take care of the site.
If you know of anyone who could take it over, please let me know.
I sent here several dozen of soldiers on Peleliu that are not on her site and it sounds like due to health reasons, she just cannot do it.
If you know of any sight that might have current information on the soldiers that fought there, please let me know.

I have visited the tank your Grandfather died in numerous times.
I saw from the web page that George and Otto were buried at the Manila American Cemetery.

I took flags over from where I flew them on White Beach and Orange Beach on September 15, 2016 at 0830 in the morning.
I sat on the beach with tears in my eyes.
Here are a few of those pictures.
If you want the flags, let me know and I will mail them to you. I have one I flew on Otto’s grave then on George’s.