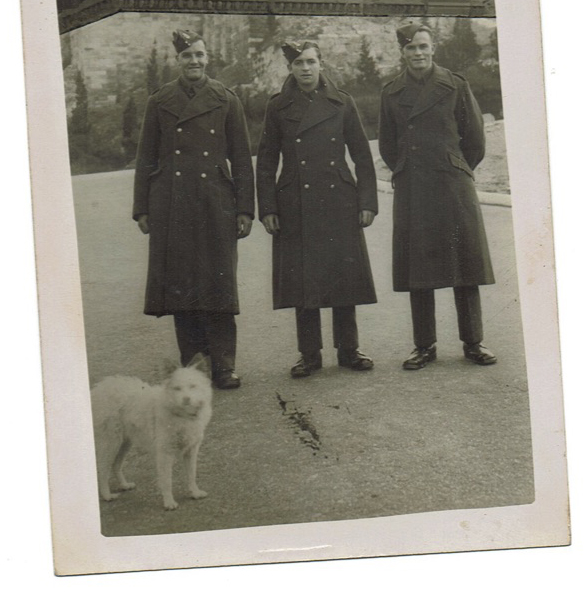 Photo submitted by Jane Cassidy and used by permission

Private Francis Elliot Downs, a medical orderly in the Royal Army Medical Corps, was probably relatively unusual among the British and Commonwealth forces sent to Greece in advance of the German invasion in April 1941.

While many were in the country for only weeks, Frank spent almost a year in Greece, being among the first to arrive and the last to leave. Like many who became prisoners of war, Frank, who died in 1996, spoke little of his wartime experiences but his story has been pieced together by his daughter.

Frank, from Barrhead near Glasgow in Scotland, sailed from Greenock in Scotland in June 1940 with 26th British General Hospital aboard the RMS Queen Mary – it was no luxury liner by then, but painter grey and crammed with thousands of troops.

Due to the presence of the Italian Navy in the Mediterranean, the convoy – the first “Winston’s Special” or WS1 sailed all the way round the Cape of Good Hope to South Africa, then on to Trincomalee in Ceylon/Sri Lanka, where it arrived on August 1 .

From there, 26th BGH sailed to the Suez Canal on smaller ships, the Karagola and Khedive Ismael, via Bombay.

After some weeks at the Sarafand Army Camp in Palestine, 26th BGH left for Greece as part of Operation Barbarity, the first movement of British support for Greece, arriving in Piraeus on November 17 or 19.

Frank was 21. Hospitals were set up in three hotels in Kifissia, Athens, the Cecil, Olympus and Aphergis. Greek casualties from the war against the Italians began arriving in January 1941.

By April 3, three days before Germany declared war on Greece, 26th BGH had more than 600 patients. Within days, it was the only functioning military hospital in Greece.

During the Battle of Greece, extra beds were set up in tents to accommodate the huge number of casualties. Air raids had been taking place for some time as the hospital was near Mehdi airfield, but it was never hit. Eventually the sounds of fighting north of Athens could be heard.

On April 24, dozens of patients and staff from 26th BGH were among 1000 evacuees who boarded the Greek ship Hellas at Piraeus Harbour. Hellas was bombed by Stukas that evening and set on fire. The only gangway was destroyed, leaving many trapped. Around 400-500 people died. Some returned to the hospital with worse injuries than those they had left with.

The hospital was evacuated the following day. Frank was among those chosen to stay behind with the patients who couldn’t be moved – he maintained the Scottish orderlies were top of the list. German troops reached the hospital on April 28.

On May 13, 26th BGH’s 290 patients and remaining staff were moved to the prisoner of war hospital at Kokkinia, to join up with what remained of 2/5th Australian General Hospital.

Frank would stay there until October 1941, other than a brief time at an emergency hospital set up at Athens Polytechnic to receive wounded from Crete. It wasn’t open long – apparently it was too easy to escape from.

New Zealand doctor John Borrie writes in his book Despite Captivity about how difficult it was to carry on working at Kokkinia while going hungry. Worse was to come.

In late October, Frank left Kokkinia. He probably made a similar journey to Borrie, being transferred to Salonika by ship and then spending 10 days crammed in a cattle truck-type train journeying through Serbia and Austria to the furthest reaches of eastern Germany, again with little food.
Frank’s destination was Stalag VIIIB at Lamsdorf, now Lambinowice in Poland. He worked in the hospital there for two years until being fortunate enough to be repatriated via a prisoner exchange. His final journey of that part of the war was by train and ferry to Sweden.

At Gothenburg, Frank boarded the hospital ship Atlantis and returned to Liverpool. Repatriation probably saved Frank’s life as he weighed 6 stone when he returned. His wartime experiences would haunt him for the rest of his life.