Broken buckles, medals, military decorations, buttons belonging to the jackets of artillery soldiers, a golden fountain pen and several cartridge cases for German pistol, rifle and machine gun, appeared on the ground dug in a plot next to the sea in the island of Kos, in Dodecanese. “No doubt about it – says Pietro Giovanni Liuzzi, retired Colonel from Gaeta, Lazio, Italy – this is one of three mass graves ever found of the massacre of Kos where 37 of the 103 Italian officers, executed by the Germans on October 6, 1943, were buried”. 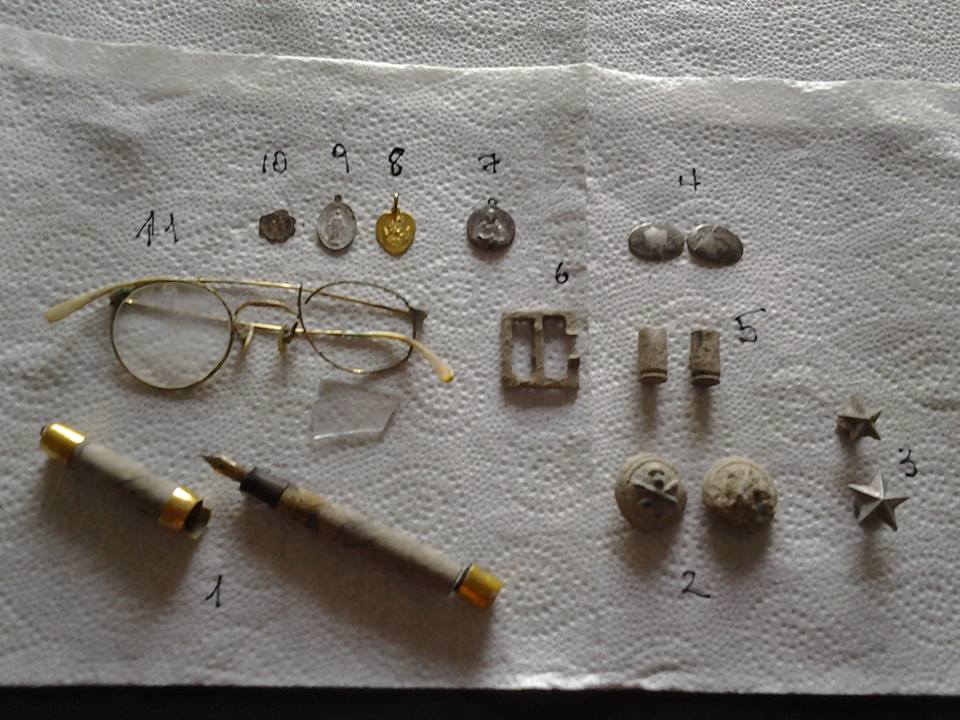 And he moves to tears when he says he cleaned up a pair of glasses with golden temples and a broken glass. This is the epilogue of a forgotten part of the Italian history, revealed thanks to the passion and stubbornness of this Colonel who, with a crowdfunding of 5,200 euro among twenty common people and a team of volunteers, five Italians and twenty young Greeks, lead an excavation from 1 to 8 July 2015 in the Greek island.

The story started in 2005, when an Italian lady who used to spend her holidays in Cos, wrote a letter to the major Italian newspaper, denouncing the oblivion into which had fallen the story of the shooting of 103 Italian officers by the Germans after the Armistice of 8 September 1943. An episode that is also one of the files hidden inside the so-called “armadio della vergogna” (shameful filing cabinet).

The case interested immediately Liuzzi, who was writing a book on the massacre of Kefalonia, and took it to heart. “Of these 103 officials, 84 did not reach the age of 26, some just 21 – adds Liuzzi, born in 1934 -. During these years of research I met their children, wives, grandchildren. “Mrs. Mary” was widowed at 20 years with a daughter of one year old who never accepted his father’s death”.

Human remains have also been found. “These are parts of femurs and of coasts. One of the volunteers, a surgeon, wanted to take them to Italy to detect the DNA. They are few because, being the pit near some salterns (it is in fact now filled by the water), the salinity probably dissolved the bones. For the rest – continued the Colonel -, all that we found, if it will be not requested by the rightful owners among the descendants of the Fallens, it will be brought back to Kos, where it will be pointed out at the local museum, because of the great interest shown by the Greek authorities”.

Yes, because this is the sorrowful point. In Italy, in vain Leuzzi knocked on every door, trying to organize a campaign of excavations to find the remains of these 37 officers. The other 66, previously found in eight mass graves, have been transferred into the War Memorial Overseas in Bari.

“I did what I could, thanks to volunteers and individuals – wanted to emphasize the Colonel -. The mayor of Kos and his citizens were very interested about and they assured me that they will do everything possible to continue on researching, especially in the area where it was not possible to access because under the water and of the thick vegetation. With the Italian institutions, I gave up”.