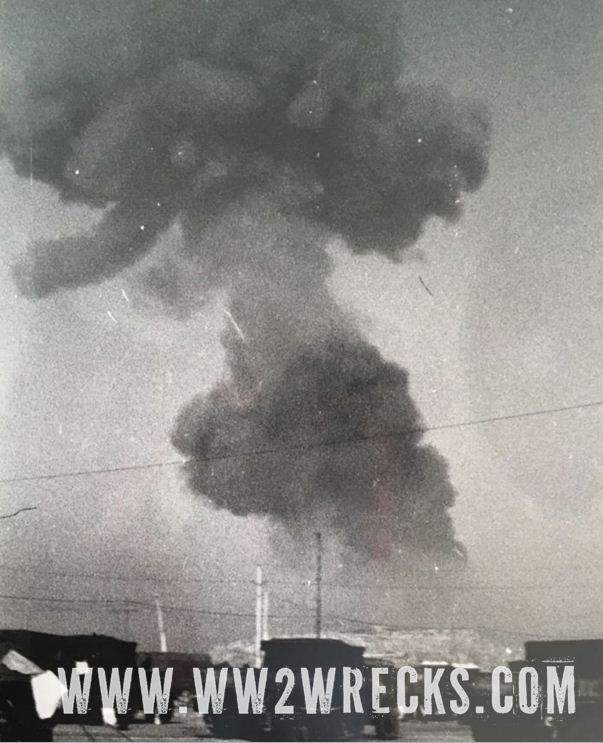 The Bulgarian steamship Knyaguinya Maria Luisa was destroyed in Piraeus harbour on May 30th, 1941.

Her deck cargo of benzine in drums caught fire and this detonated her cargo of munitions.

The ship blew up with an explosion that sank three ships in the harbour and caused some 200 casualties.

Researcher Mr. Dimitris Galon offers a different version of the events that led to the explosion, according to the Germ an War Diaries.

Below is Mr. Galon’s research:

“The KNYAGUINYA MARIA LOUISA (Княгиня Мария Луиза), former FELIX FRAISSINET, 3.807 GRT, was lost in the port of Piraeus due to an accident.

The vessel was loaded with explosives and got fire.

The Romanian steamer JΙUL, the Italian auxiliary vessel ALBATROS, and the German steamer ALICANTE were also lost, as collateral damages, due to KNYAGUINYA MARIA LOUISA´s accident.”

More details have surfaced, regarding the exact sequence of events that led to the ship’s destruction, following research by Mr. Ted Kostantinov:

“The ship arrived at the Thessaloniki port on May 22nd 1941, loaded with food cargo.

It was promptly unloaded and waited further instructions alongside the Bulgarian cargo ship Burgas.

A couple of days later a request came from the German command, for the transportation of a dangerous cargo: aviation bombs, lots of machine gun ammo, engine fuel.

The task was given to the commander of the ship Burgas, captain Petar Abadjiev.

He strongly refused to make such a transport, considering the cargo highly dangerous and unstable. And he was successful, although upon returning to Bulgaria, he was promptly retired.

Then the task was given to captain Ivan Tomov, born in 1898, the captain of Knyaginya Maria Luisa and he had no choice but fulfill it.

The ship was loaded and on May 28 it was docked at the Piraeus port. As the warehouses were full, the unloading was scheduled for May 30th. At 06:30 in the morning of May 30th, the guards of the ship noticed black smoke going out of one of the cargo compartments.

The crew and port workers tried to extinguish the fire, also fire pumps arrived and tried to spray the sides of the ship with water. After about half an hour it became clear, that the fire can not be stopped.

The black smoke became heavier and heavier, the fire was spreading to the other cargo, some /or rather most/ of it highly explosive. The ammo of various types was estimated to 6,000 tons, plus barrels of fuel.

A large raspberry-colored spot appeared on the side board – seems the main fire was there. The captain very well understood that he was running out of time.

Promptly he ordered evacuation of the whole crew, he only ordered his two deputies and the machinists on board. And of course, he himself remained on board to command the operation – moving the ship out of the port, to the opened sea.

The Greek tugs dropped ropes to help direct the ship. Unfortunately they did not reach too far, before the ship disappeared in a sudden ball of fire.

Two instant enormous explosions tore the ship in two parts, one was shredded to pieces and the other one was pushed down to the sea bottom.

The shock wave damaged some port buildings and caused fire on the Italian ship Albatross.

Carrying some ammo, it also exploded and sunk rapidly.

The German Alicante also sank and a Romanian cargo vessel was damaged.

Hadn’t the Bulgarian crew and the Greek tug boats moved the ship to a little distance, the destruction on land was going to be much worse.”

[1]  Hocking C., Dictionary of Disasters at Sea during the Age of Steam (Allen)