The setting appears to be soon after the invasion by the German Army of the island of Crete in May 1941, and after the incomplete evacuation of Allied troops left many Allied personnel on Crete. Those in charge of those left behind had ordered the troops to surrender to the Germans.

It is likely that this is a true account of a group of four Allied soldiers’ experiences. It is hard to imagine it being a work of fiction. Whether Charlie John Cobould was part of the group of four men is not known.

A ……… was overwhelming Crete. Was it just that the sun was disappearing beyond the rugged mountains that had, for the past 10 days witnessed the gradual erosion of their …… by the invading the German paratroopers, or was it the emptiness that filled the air, that environment that was among the long lines of weary men who stood waiting on the battle scarred beach hopefully awaiting transport to the ship silhouetted on the horizon?

They knew that minutes were precious, and that some must yet see another sun rise on the island that they had fought so hard to save. Many must have felt that, after all, this was as the German propaganda claimed — their “Island of Doom” when they saw the hulls of the [evacuating] ships turn away and gradually diminish into the night.

Their commanding officer call them together and explained that the ships would not be coming back and that the High Command had ordered them presumably the men to destroy all arms and surrender, without resistance, to the Nazi troops.

Among the ill-fated men there were four who decided to make a last bid for freedom. As they separated from the crowd, their one thought was to survey the coastline and to locate a boat. Each realized how media had their chances were, especially as some had had previous experience with sailing or navigating. However, knowing this could be their only means of escape, they decided to risk the sea rather than undergo the humiliation of imprisonment.

As they picked their way through the rocks, the stench of death hung all around like some permeating fog. It was not until some several hundred yards had been covered before they began to breathe pure air — already a sense of freedom prevailed.

The conversation which until now had been rather meaningless, became more exhilarated, for on rounding a cliff, they sighted a small village nestling in a cove. Hopes were raised as they perceived two boats on the shore. Their pace quickened, as they realized that yet their hopes may be fulfilled if one was seaworthy.

As dawn was approaching, they had to make a rapid decision with what little knowledge they had, before they were discovered by Germans or Greeks.

The one [boat] chosen was apparently seaworthy, it was a 20 foot fishing caique, with masts capable of mounting sails. Feverishly working against time they pushed it into deeper water and rowed it to a well concealed inlet which fortunately was nearby — the task had barely been completed before daybreak.

The next step was to obtain the cooperation of the villagers. Water and food was essential, its future used to remain obscure — inability to speak the language presented another problem.

On entering the village, they were met with looks of both welcome and fear. Prospects were beginning to fade when they heard an encouraging word, which sounded to them like a greeting. On turning they could not help being amused by the attire of the speaker, an elderly bearded Cretan. He wore a “petsika” or bandanna around his unruly hair, a double-breasted embroidered waistcoat of bluish colour, black baggy knee-length “brakas” held up by a long dull red sash wound around his waist, and knee high boots. He looked dirty in appearance but kind of heart and he was evidently the mayor of the village.

By rubbing their stomachs in a see-saw motion the four men intimated that they needed food. The old Cretan appeared to understand. Consequently, it was not long before they left the village fully provisioned.

It was agreed that, after preparing and loading the boat, they part to keep a strict watch over their domain, reassembling at night fall.

It was dark and moonless when next they met; only one specifically watching would have observed them slipping away. Not a word was spoken for fear that at this stage, they would be apprehended. As the minutes passed uneventfully the tension eased as their straining backs rowed them further from the shore, but there was no time for rest and the one thought in every mind was to put as much water between themselves and the island before daybreak. Soon after midnight a gentle breeze allowing use of the sails which they managed to hoist with much difficulty gave tired men relief.

It was only then that they allowed their minds to wander back to their comrades, now languishing in the prison camps. It seemed too good to be true that the first and most difficult part of their escape had been accomplished.

Geoff Brown who, from the outset was deemed as the leader, immediately set about dividing the party into two shifts, one to watch their course, whilst the other gained a little respite. He realized that now their only enemies were to be a quiescent wind or a patrolling Nazi plane which would either strafe them or radio back to have Stukas attack them in force.

The African coast was so extensive that he knew it was impossible to miss it, for had he not, only prior to the battle of Crete, learnt that the Allies had formed a line 150 miles southwest of Benghazi.

He grimaced as his mind wandered back over the first campaign in which he had participated in Libya.

He remembered the exuberant feeling of victory as he, together with the others of his company, had so utterly defeated the Italians, but the lines on his forehead deepened as he compared that campaign with the one from which he had just emerged, had they not fought just as skillfully, and with the same brilliant leadership?

Why was it then that the second Dunkirk had to be staged? It gradually dawned on him. Yes – the same old cry – material, equipment, men – the Nazis dropping from the sky shielded by hundreds of planes, Nazis equipped with everything from saccharin tablets and compasses to Lugers and automatic guns compared with the Britisher, who, if he was lucky, had a bandolier slung across his shoulder and a rifle in his hands.

Someday, he mused, when we meet again – perhaps it will be a little while – but we will bring you to your senses begging for mercy just as we did to the Italians. 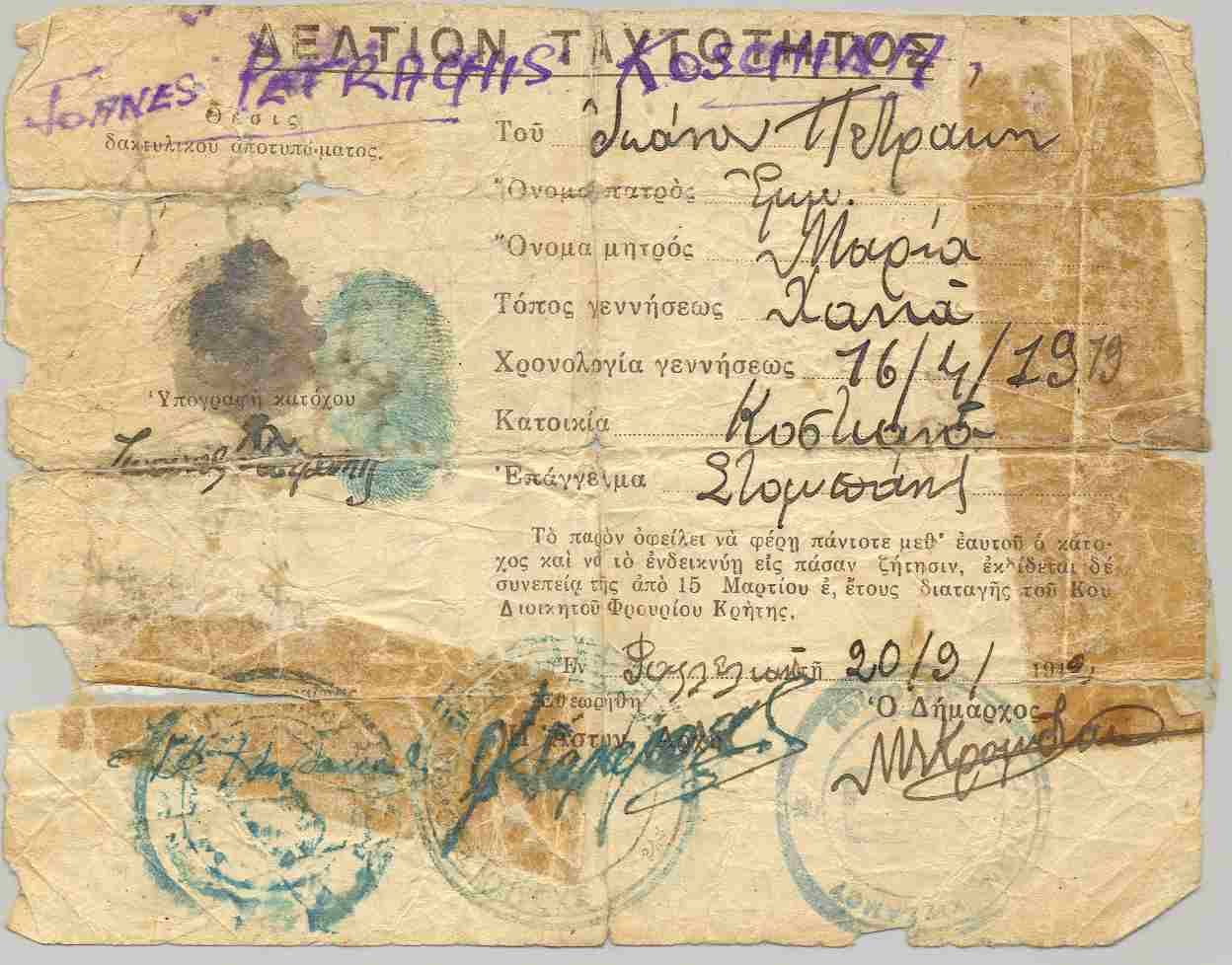 Dawn. the most crucial period had been with them for just an hour, it seemed longer, this was the time which any plane, whether friend or foe, patrolled an island base.

Geoff suggested that the sails be taken down so that apart from the gentle heaving, the boat would remain motionless. He realized that there was a chance the boat may be passed, particularly if the plane was to be at high altitude. Minutes dragged by, the men sat nibbling at bread and olives unconsciously tossing the stones into the water silently lapping against the hull. Their muscles tensed as the expected drone reached their ears, it was not then possible to define whether it was the unsynchronized beat of the Nazi or the even tempo or the even tempo let forth by the British planes. It gradually grew louder and by the manner in which the four looked at one another, it became evident that the aircraft would be carrying the black swastika, that dreaded cross, which had overrun numerous countries, carrying death and destruction before it, not only to the armed forces in which it contacted but to terrified civilians and innocent unsuspecting children.

Soon they could see the silhouette of a twin-engine bomber against the greyish stratus clouds, it was travelling toward them bBut some distance astern. Perhaps, after all, with no billowing sails, or foaming wake to help disclose their position, they may be missed or even if seen, they may be mistaken for fishermen. The too-familiar sight of a Junkers sped by apparently unconcerned by their presence, was it their good fortune to survive what seemed to be their last hazard, it seemed certain when they saw the black dot gradually disappear without altering its course. No time was wasted rehoisting the sails and soon they were travelling slowly towards Africa and freedom.

Three days had past, days of monotony, hunger and the expectancy of what would lie over the horizon. Apart from the droning of aircraft, the journey had been uneventful, they had been fortunate that the wind prevailedotherwise with their diet of only bread and the detested olives they would have been in a very weak state.

It was approx 10 a.m. when one of them sighted the long, low coastline …. (the narrative ends at this point, and was never finished).

Editor’s note: It is possible that “Geoff Brown” is CJC, who had served in Libya against the Italians prior to fighting in Greece and Crete. As a sergeant, it is probable that he was the highest ranking person in the group of four and thus leadership would fall naturally to him. But we will never know for certain ….

Initially, in 1941, CJC was a prisoner of war, but escaped sometime that year and spent the rest of his time on Crete with a false name, false papers and the ability to speak Greek.