BY PIERRE KOSMIDIS
PHOTOS & TEXT: GEORGE RIGOUTSOS
www.rigoutsosphotos.com
At a depth of 34 meters off the coast of Naxos, approximately half a nautical mile from the coast, divers found a RAF Bristol Beaufighter in 2007. Based on testimonies of fishermen, but also the inhabitants who had seen the events, this specific Beaufighter was shot down in 1943. 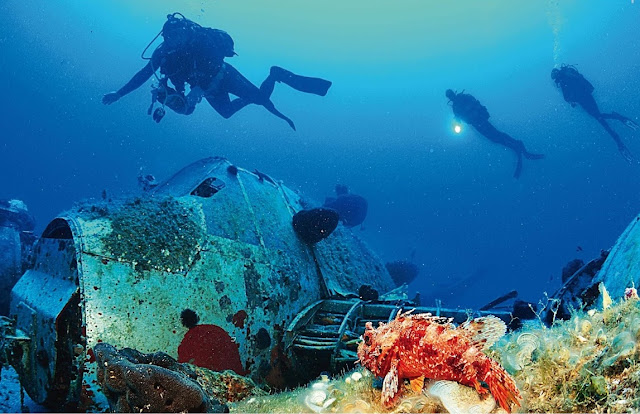 The “whispering death”, as it was called by the Japanese because of the sound of its engines, the Beaufighter was a multi-role aircraft, which played an important role during WWII, in almost all theaters of fighting.
“As we get closer we see that the aircraft is in almost undamaged condition.
It looks like it landed there with care and skill, but of course this belongs only to the realm of our imagination since no airplane will not “choose” to land 34 meters below the sea surface” says acclaimed photographer and scuba diver Giorgos Rigoutsos. 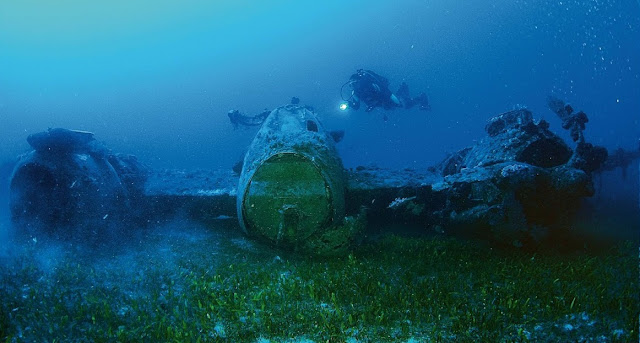 A piece of the rudder over the tail fins is missing, and some bullet holes in the side of the aircraft suffered by anti-aircraft fire vividly demonstrate what caused the twin engined aircraft to ditch at sea.
The cone at the airplane’s nose, made of thin metal, has eroded and is now close to the aircraft.
According to WW2 researcher Manolis Bardanis the crew managed to survive and was saved by Naxos island inhabitants who rushed to their rescue.
It consisted of  New Zealander W. E. Hayter (RAF 47th squadron) and T. J. Harper (603 RAF squadron).
Specifications:
Manufacturer: Bristol Aeroplane
Type: Bristol Beaufighter TF Mk X
Crew: two
Length: 12.70m.
Wingspan: 17.63m.
Maximum speed: 512 km/h
Radius: 2913 km. Maximum.
Reinforcement: four machine guns Hispano 20 th.
4 303 guns of 7.7 mm. On the right wing,
2 outdoor 303 guns of 7.7 mm. On the left,
4 rockets RP-3, 41 kg per wing bomb or 1 113 kg per wing,
1 Torpedo 457mm
375
2108
923
628
677
481