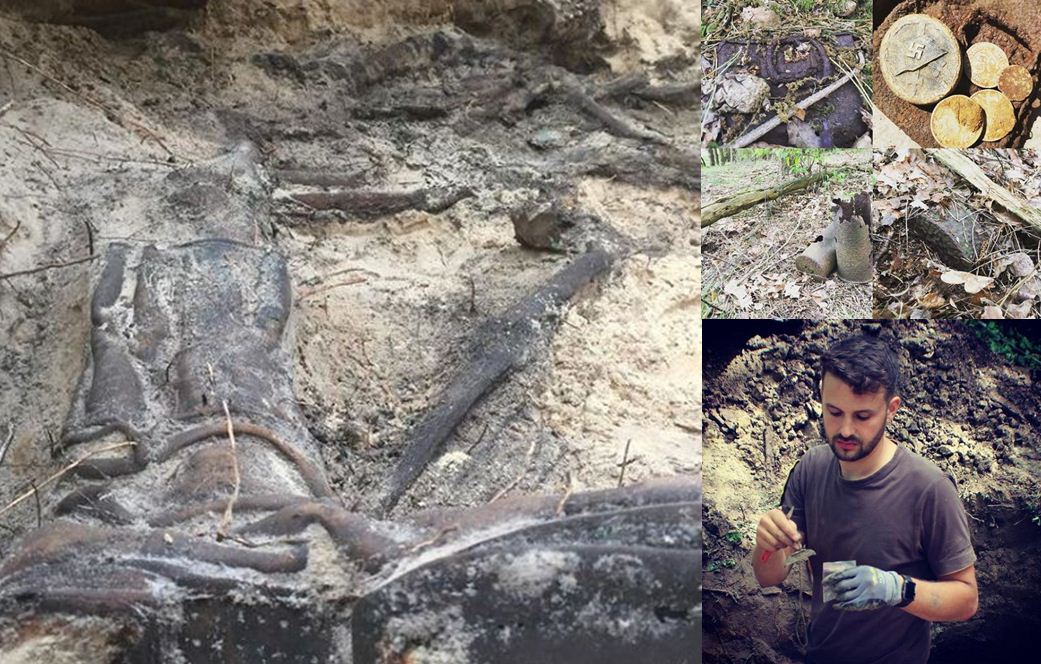 It is estimated, according to various sources, that 50 to 80 million people died as a result of World War 2, be it on the battlefield, or from war-related diseases and famine. The numbers by themselves are faceless, just statistics that demonstrate the monstrosity of warfare.

But behind each number, a human story lays hidden, a story of loss, a personal tragedy that affected millions of families for decades, the death of a human being, be it a soldier, or a civilian who fell victim to the turmoil of warfare and got caught in the maelstrom of destruction.

When you connect the dots and put a face on each of those numbers, a human story emerges, which makes History quite personal. This is exactly what Jonny Bay, 29 years old, an author and researcher from Northern Ireland does, bringing to light long forgotten personal stories of young men who perished during the war.

www.ww2wrecks.com contacted Jonny Bay, who grew up in Omagh and now lives in Berlin , to learn more about the projects he is involved with, such as Legenda, shed light to some of the initiatives he has underway and discuss some of the startling discoveries made, which demonstrate the horrors of war.

How did it all start for you, the interest in WW2 and what has been your inspiration?

My interest in the Second World War started on a family holiday to New York City when I was 8 years old. I remember going into a thrift shop with my parents, and seeing a German Helmet.

Well after that it all started, I guess we all find something or see something that takes our imagination. I collected Militaria until recently, my main focus was on 22 days in early 1945, the Battle of Berlin. Mainly ID Papers/books and photos or numbered medals with stories for Berlin. I collected both sides of the conflict.

You recently returned some personal items, a Soldbuch, to the family of a deceased soldier. Tell us a bit more on this, the human story behind it and what were your feelings when you found out the family of this man?

Yes, they were incredibly lucky, as the family happened to search online for their great grandfather’s name, and it came up on my Instagram account! They were quick to reach out to me, and of course they had other pictures, and even pictures of when they visited his grave a few years ago.

He died of his wounds in 1945 in Denmark, after arriving by boat badly wounded, his wound tag that was around his neck was also inside the Soldbuch. They are really happy to have these items back in their family. I was really happy to be able to return it.

How relevant are the lessons of WW2 today? Do you see any similarities and what is your key message?

Interesting question, today it is common to see posts or comments that are clearly fascist or revisionist in nature, this saddens me it has not even been 75 years since the end of WW2 and the same rhetoric and nationalist jargon is used again.

For many WW2 is something distant, it should not be. The lessons we can learn from this time should guide us, but that is far from what is happening in reality.

My key message for anyone wanting to sympathise with extreme views: I have seen the bodies in the positions they fell in from both sides Axis and Allied and the tragic part is they are all the same. Some mother’s son, far away from home and killed for nothing, war is the downfall of man, so are the extreme views that create such hate.

Making the connection between a WW2 object and the human story behind it, is quite fascinating. War is not just about numbers and inanimate objects, but mostly about the human stories behind them. What is the most striking personal story you managed to decipher?

I tend to agree, I am one of many who started to collect stories of soldiers, as time goes on people have seen the importance of collecting these stories and not just nameless items like medals, helmets and daggers.

The most interesting item has to be the bloodstained SS Soldbuch (SS ID Book) for a 17 year old who was killed in the Battle of Berlin, one of the last SS ‘soldiers’. He died in his first battle which just so happened to be the last battle major battle of the war in Europe.

His SS Soldbuch found on his body was sent to his father along with a letter that confirmed the death of his young son. His story is tragic, he went through 7 years of indoctrination and a few months of training to be flung into battle with essentially little or no hope of coming out alive.

When showing it to people I often pose the question, ‘for what?’ I think his story epitomises the fanatic desperation of the Third Reich, right to the end they sent their young boys to die in battles that were long decided. It is the most poignant item I have, I have led historians and TV crews to the foot of his grave in Berlin. If that doesn’t get interesting enough, I have a Soviet Soldier’s ID who was fighting in the same area…

Even today, WW2 can be seen on different locations, be it a bullet-ridden building, a flea market with WW2 items on sale, a battlefield archaeology project. Which is the best way to remember and pay respect to the countless souls lost during WW2?

Berlin especially, I am glad we have these silent reminders along the streets, and I am happy people like Peter Graham from Berlin Battle Damage have started to record these places before they are cleaned up!

The best way to pay respect to fallen soldiers of all nations is not to fall victim of glorifying war or extreme views. I own many soldiers stories, and they will remain very much ‘their stories’ – I just am there to tell the story in a fitting context.

I think many collectors need to understand the items we may own today are just being held by us for future generations to learn from. The greatest thing we can do to respect the fallen of all sides, is to remember the humans behind these stories and make sure to teach future generations of the horrors of war.

Which is the most important project you have undertaken and why? What are your next plans, your book etc.?

It is a fascinating project, I hope that by sharing the collection of items and stories from both sides that the human element of the Battle of Berlin is shown, this is important for me as many books nowadays focus only on the maps, units and movements and figures which for many is too abstract. I hope that by showing their items and faces that people will find their stories and experiences as interesting as I do.

Tell us about the Legenda projects, the importance of a respectful approach to battlefield archaeology and the proper treatment of remains.
I have been a member of Legenda for quite some time now, I have taken part in the exhumation of hundreds of soldiers from both world wars. Legenda are a non governmental organisation of around 60 volunteers from all over the world, we are responsible for finding the victims of war still missing in Latvia.

The items found on the soldiers are buried with the soldiers, the personal items are used to help to identify the victims. Many people ask me what is it like, and what it means to me.

Both I find hard to explain but here is the best answer I can give. Firstly, no words will describe what it is like to find a soldier, to see the remains, how he died and to be that person entrusted to exhume the remains, it must be done with the utmost respect, patience and understanding.

What it means to me, well to stand at the foot of a grave stone in a military cemetery and see the fresh grass growing below your feet and to know you were a direct result in giving the soldier his name back is a feeling I can’t explain, but it has become my personal mission to find more missing soldiers.

Legenda essentially gives back the soldiers identity, the missing are found, taken out of the forests and trenches and buried in a proper military cemetery and hopefully we can trace relatives if they are still alive.

It is hard work, but it needs to be done, all victims of war deserve to be buried with dignity and respect, regardless of who they were or what they fought for.

This is very important work, and Legenda deserve all the help they can get. If you want to help, please think to make a donation to go towards the expenses we face, from getting permits to paying for body bags/personal effects bags, to even paying for the use of heavy equipment.

To support our mission